S. Smith from the U.S. Elections Atlas forum will be providing % change maps between the 2008 and 2011 elections, and I will be posting them here. (Many thanks to him for his permission!)

The first one he has made is for the Conservatives, 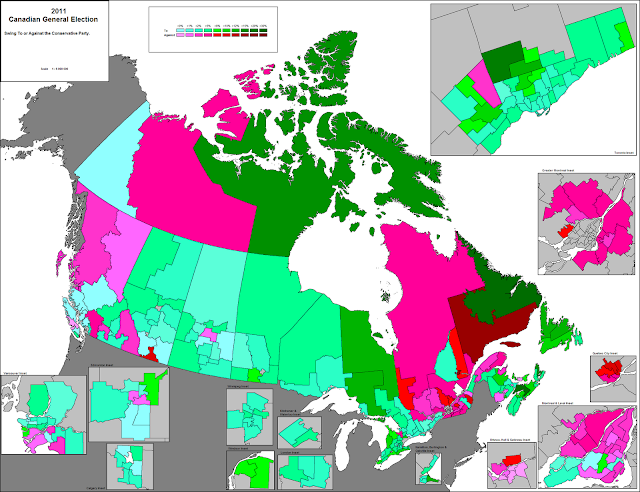 As you can see, the Tories gained in much of Canada, save for Quebec. In Newfoundland we can see they gained a lot from their horrible performance in the 2008 election thanks to the "Anybody but Conservative" campaign of then Premier Danny Williams. The Tories did much better across Atlantic Canada as well, and benefited especially in Nova Scotia, perhaps at the hands of an unpopular NDP government there. Their strongest gains were in Labrador, thanks to the strong candidacy of Innue leader Peter Penashue in an historically safe Liberal seat, and in Cumberland--Colchester--Musqoudoboit Valley where Independent Bill Casey won last time.

Quebec of course is a different story. Here we see a mostly pink or red province with splotches of green. The biggest Tory gains appear to be in the west Island, where many English Montrealers live. It appears that they were probably Liberal voters jumping from that sinking ship. Pay special attention to Mount Royal (the darker green riding in central Montreal). That's a riding that was once called the safest Liberal seat in the country, and was formerly represented by Pierre Trudeau himself. The seat has been held by the Liberals for the last 70 years, but the Tories came within 2500 votes of winning it in 2011.

Ontario by contrast, was mostly green on this map, meaning gains for the Tories. We can see stronger greens in Northern Ontario, thanks to the gun registry issue which hurt the NDP somewhat in that region. Also, note the dark green in Vaughan, where the Tories won a recent by-election from this former Liberal bastion seat. The Tories only lost support in a handful of seats, mostly in the Ottawa area, thanks to fears of public service cuts. Losses in Renfrew--Nipissing--Pembroke can be attributed to the Independent candidacy of Hec Clouthier taking votes away from controversial Tory incumbent Cheryl Gallant, while losses in Simcoe-Grey can be attributed to the Independent candidacy of incumbent Helena Guergis who had previously been expelled by the Tory caucus. Finally, in Bramalea-Gore-Malton, the Tories lost votes in a riding they actually gained from the Liberals, thanks to the surprising strength of the NDP's Jagmeet Singh which seems to have taken votes from both the Liberals and Tories.

The Tories had marginal gains across the prairies, losing support in just 5 seats, none in Manitoba (again, thanks to an unpopular NDP government). The Tories lost support in just one Saskatchewan riding, and I can only guess it was because of the candidacy of former MP Jim Pankiw, who only just received 2% of the vote, however that was more than the 1% decrease in support for the Conservative candidate. Meanwhile in Alberta, one dark red riding stands out, that being in Lethbridge. The Conservative candidate in the riding, Jim Hillyer was noticeably absent in the campaign, which helped reduce the Tory % of the vote by 10%, still good enough for a majority however. The other three ridings the Tories lost support were in urban parts of Edmonton and Calgary.

British Columbia was a province that saw the Conservatives lose support in many ridings, perhaps due to the infamous introduction of the HST. The losses only hurt them in two seats however, when they lost Surrey North to the NDP and Saanich--Gulf Islands to the Greens. Meanwhile, they gained Vancouver South from the Liberals.

Finally, in the North, the Tories cemented their 2008 pickup of Nunavut, while also gaining in the Yukon. However, their 2008 strong showing in Western Arctic collapsed by 5%.
Posted by Earl A. Washburn at 2:40 AM