The Northwest Territories held a general election for its territorial legislative assembly on Monday, the 18th election since the formation of the assembly in 1951. The NWT Assembly is non partisan, using the “consensus government” model. The winning MLAs will come together next month to elect a new a Premier from among them. Only the Northwest Territories and Nunavut uses this system of government in Canada.

Since the creation of the office of Premier in 1980, no Premier has ever served in that capacity for more than one term. The tradition in the NWT is to choose a new Premier after every election. So, despite the fact that Premier Bob McLeod was re-elected in his Yellowknife South riding does not mean he will remain as Premier. It is more likely that the new assembly will choose someone different to become Premier.

The consensus model has been criticized as being somewhat undemocratic, as voters do not get to directly vote for Premier. While this is technically true in every other province and territory in Canada, the non-partisan nature of the NWT Legislature means that voters have no influence in who will become their Premier. MLAs choose the Premier behind closed doors, in secret meetings, and do not divulge their votes to the public. While there are no rules against members openly discussing their votes (it is not after all a papal conclave), members who do discuss details are often ostracized by their colleagues. The result is that there is no accountability for their decisions, as voters have no knowledge of which MLAs supported who for Premier, and cannot punish (or reward) their representatives in the ballot box for their actions.

Since the last election held in 2011, the boundaries of the NWT's 19 ridings have changed, following a controversial redistribution process, which had to be settled in the territorial supreme court. The size of the assembly was not changed, and most of the territory's rural ridings were not effected, but the boundaries in the territorial capital of Yellowknife were shifted around a bit. The most major change was when the abolition of the Tu Nedhe riding, the territory's least populous district, which consisted of two Dene communities in the eastern part of the NWT. Tu Nedhe was merged with part of the Weledeh riding, becoming “Tu Nedhé-Wiilideh”. The new riding is still underpopulated, becoming the second least populous riding in the NWT, after Deh Cho. The remainder of the Weledeh riding became the riding Yellowknife North, making it a strictly urban riding.

The controversy surrounding the redistribution came as a result of maintaining the imbalance of representation between Yellowknife and the rest of the territory. The City of Yellowknife makes up nearly half (46%) of the population of the NWT, but only 7 of the territory's 19 districts (37%) are in the city. The redistribution process did not address the imbalance, and as a result, every single Yellowknife district continues to be over populated, with most districts being more than 20% larger than the territorial average.

In 2011, only one incumbent was defeated in the entire territory. In this election however, there were eight defeated incumbents. Coupled with three retiring MLAs, the election resulted in only eight returning MLAs. While Premier McLeod was re-elected, the territory's finance minister, Michael Miltenberger lost his seat of Thebacha (Fort Smith), a riding he had held since 1995. Despite the large turnover, the Assembly's most controversial incumbent, Michael Nadli was narrowly re-elected in Deh Cho, despite have spent eight days in prison during his term, after being convicted of assaulting his wife. Interestingly, Nadli was the only candidate to defeat an incumbent in 2011. 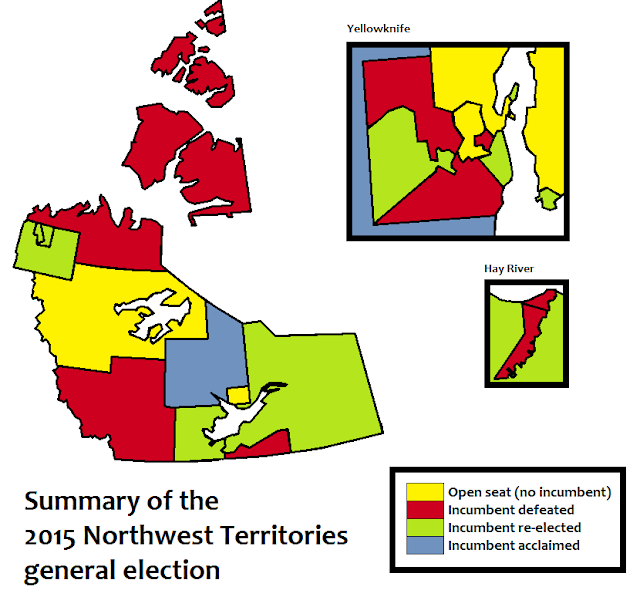 Out of the 19 ridings, there was one district where no election was held. In the riding of Monfwi, incumbent MLA Jackson Lafferty was re-elected with no opposition. Only two women were elected (Julie Green in Yellowknife Centre and Caroline Cochrane-Johnson in Range Lake), both of whom had to defeat incumbents to get into the legislature. This represents no change in the number of women elected to the assembly, as one MLA (Wendy Bisaro) did not run for re-election, while Jane Groenewegen was defeated in her Hay River South district. Green's election makes her the first out lesbian to be elected in the assembly's history.

The election was originally intended to be held in October, but was superseded by the October 19 federal election. According the territory's fixed election date legislation, the NWT is to hold elections on the first Monday in October every four years. However with the next federal election scheduled for October 2019, it is likely that the next NWT election will be held in November of 2019 unless the legislation is amended.