Today is election day in Prince Edward Island, which means my second and final projection of the campaign. Unfortunately since my last projection, there has only been one public poll released, and it is now over one week old. The poll, conducted by Corporate Research Associates (CRA) was published on April 24. It showed the governing Liberals in the lead with 44%, nine points ahead of the opposition Progressive Conservatives who were at 35%. The poll showed a narrowing of the race from numbers published a few days earlier by Abingdon Research. The CRA poll also showed the NDP at 15% and the Greens at 6%.

The CRA poll was commissioned by Charlottetown's The Guardian newspaper, which did not publish any tables. However, the corresponding article in The Guardian mentioned that the Liberals were well out in front in Kings County (58% to 31%), the traditionally more Tory-friendly part of the province. In Queens County, which contains half of the province's population, the race was much closer. The Liberals led there 39% to 37%. Numbers from Prince County were not published, but we can extrapolate from the other two county results that the Liberals lead there 43% to 35%. 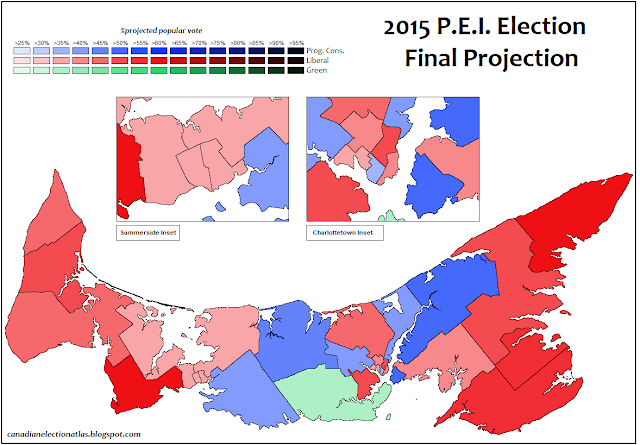 While there has been no province-wide polling conducted in the last week of the campaign, we did get to see a riding poll from Kellys Cross-Cumberland, where Green Party leader Peter Bevan-Baker is running. The Greens commissioned Oraclepoll Research to poll the riding, and the numbers showed that Bevan-Baker was in the lead, with 38% of the vote, to Liberal incumbent Valerie Docherty's 34%. If the Greens do with the riding, it would be only the second time in PEI history where a party other than the Liberals or Tories won a seat.

Both the CRA poll and the Oralacle Research poll in Kellys Cross-Cumberland have been used to form my final projection. But due to the lack of polling and PEI's quirky nature, I had to adjust the numbers in a few ridings, specifically three ridings that are open seats where the Tories are running strong candidates, and a fourth where a floor-crosser is running for re-election. The three open seats with strong Tory candidacies are Charlottetown-Brighton where PC leader Rob Lantz is running, Borden-Kinkora and Rustico-Emerald. In the latter two ridings, the Tory candidates also ran in the 2011 election where they increased the PC share of the vote considerably over the provincial average, despite both losing to Liberal incumbents. Now, those Liberal incumbents are not running again, meaning the PC candidates will probably get even more of a boost in the polls. I also gave a boost to Hal Perry, the Liberal incumbent in Tignish-Palmer Road. Perry was elected as a Tory in 2011, but crossed the floor to the Liberals. I assume he will retain the 6% swing he got for the Tories from his personal popularity. 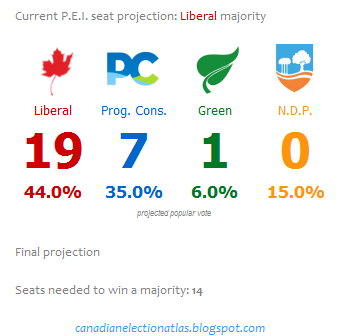 There are so many different local factors that will effect the races in each of Prince Edward Island's 27 electoral districts. These factors will make any prediction or projection of today's election very difficult, if any accuracy is to be had. It is hard to speculate which ridings will swing which way; we can only make assumptions based on known candidacy strengths. Last election, some ridings swung strongly Liberal, while others strongly PC. While many of these swings can be explained in hindsight, it would have been near impossible to accurately speculate on those swings before the election. Who would have predicted the Liberals to get a 24% two-party swing in their favour in Evangeline-Miscouhe, while the Tories got a 12% swing in Stratford-Kinlock and an 11% swing in Rustico-Emerald? Overall, between 2007 and 2011 there was only an overall average swing of 0.2% across the entire province, yet the Tories gained four seats from the Liberals, and the Liberals gained one back.


If the huge Liberal numbers in Kings County turn out to be true, then they should be able to win the two Tory seats in the county: Souris-Elmira and Georgetown-St. Peters. The only other Liberal gain I am projecting is in the riding of Tignish-Palmer Road, where the Liberal incumbent was elected as a Tory in 2011. With the PCs doing well in Queens County, my model shows them gaining four seats there from the Liberals: Tracadie-Hillsborough Park, Charlottetown-Brighton, West Royalty-Springvale and Rustico-Emerald. Additionally, my model shows the Tories picking up Borden-Kinkora (in Prince County) from the Liberals. Finally, my model shows the Greens winning their first ever seat in Kellys Cross-Cumberland. In total, this gives the Liberals 19 seats, the Tories 7 and the Greens 1. Despite polling in third, the NDP would be shutout, although they have an outside shot at a couple of Charlottetown seats. 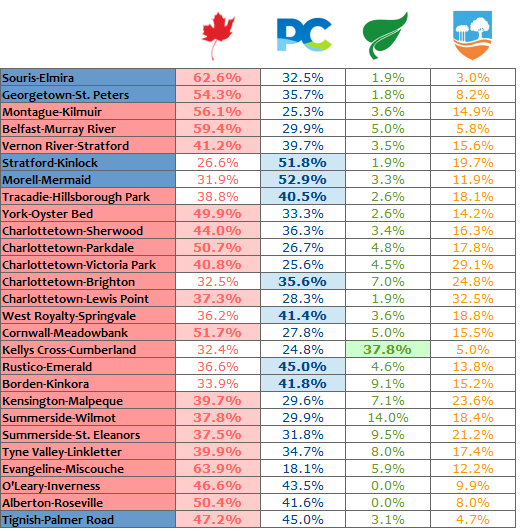