Nunavummiut (residents of Nunavut) went to the polls Monday to elect their legislative assembly. Unlike Canada’s 10 provinces or the Yukon, Nunavut has a consensus government, meaning there are no parties. The territory’s 22 lawmakers are elected the same way as politicians are in the south, except they are all independents. Now that the election is over, the newly elected legislative assembly will convene beginning on November 15 to elect a Premier from within its ranks.  This form of government is known as “consensus government”.

Nunavut’s current Premier is Eva Aariak, who represents the Iqaluit East constituency, in Nunavut’s capital. She has been Premier since the last election in 2008, when she replaced Nunavut’s first Premier (Nunavut became a territory in 1999), Paul Okalik.  Aariak however announced she would not be seeking the Premiership for the next term, but she did run in the new riding of Iqaluit-Tasiluk in the city’s north end.

Nunavut is Canada’s smallest territory with only 32,000 people. However, it is Canada’s third fastest growing jurisdiction, with a population growth rate of 8.3% between 2006 and 2011. This trails only Alberta and the Yukon. This population growth spurred the territory to increase the size of the legislature from 19 districts to 22, changing the electoral map of the territory. Iqaluit, the territory’s largest city- gained one seat, from three to four. Arviat, Nunavut’s second largest community located in the far south of the mainland has been split in two, with its new riding also taking in the neighbouring community of Whale Cove. In addition- despite being Nunavut’s 7th largest community- Igloolik was also split in half, with its northern half becoming the new riding of Aggu and the southern half remaining in the former riding of Amittuq with the nearby community of Hall Beach. This division is perplexing, considering the larger communities of Baker Lake, Cambridge Bay and Pond Inlet are not split between more than one riding. Also, Igloolik registered a decrease in population between 2006 and 2011, while Baker Lake, Cambridge Bay and Pond Inlet did not. This strange pecularity showed up on election day, as only 226 people voted (out of 457 registered voters), with the winner receiving 96 votes. This is the lowest raw turnout out of all Nunavut ridings that held elections. 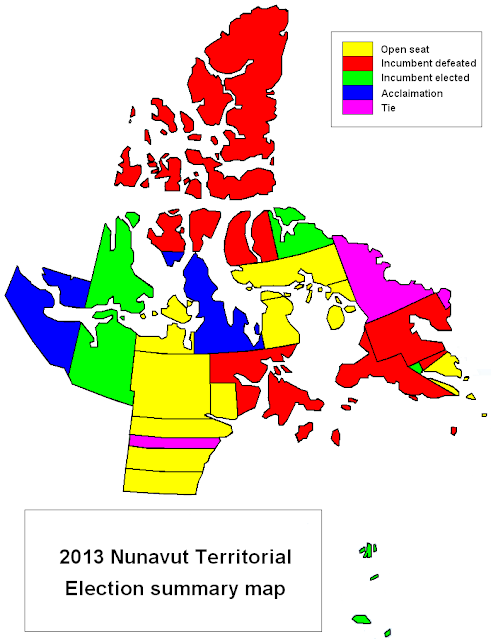 Two ridings saw no election whatsoever, as both their incumbent MLAs were elected with no opposition. This occurred in Kugluktuk in the far west where MLA Peter Taptuna was re-elected, and in the new riding of Netsilik where MLA Jeannie Ugyuk was acclaimed. She had represented the riding of Nattilik which had been dissolved. Instead of running in the new riding of Gjoa Haven, where most of her constituency was located, she ran in Nattilik which added her home community of Talyoak with Kugaaruk.

Nine of Nunavut’s ridings were open seats- that is no incumbents were running. One of those seats, Uqqummiut- on the north shore of Baffin Island resulted in a 187 vote tie. One other riding, Rankin Inlet South also resulted in a tie. MLA Lorne Kusugak found himself tied with newcomer Alexander Sammurtok with 172 votes. In both cases, a recount will occur within the next ten days or so. If they are still tied, then a by-election will occur. In the final 9 constituencies, just four incumbents were re-elected and five were defeated. The most notable candidate to go down to defeat was Premier Aariak who lost in her new riding of Iqaluit-Tasiluk (random fact: she is the fourth Premier in a row to lose their riding in Canadian elections!)

Overall, the legislative assembly will see 13 (or 14) new faces. Among them will be 30 year old David Joanasie (South Baffin riding), the youngest person to ever be elected in Nunavut’s short history and Isaac Shooyook, a unilingual Inuktitut speaker (Quttiktuk riding). The legislature will also include just three women, three Whites (non Inuit), and two past MLAs, including former Premier Paul Okalik who has been elected to the south Iqaluit riding of Iqaluit-Sinaa. He had left the legislature in 2011 to run for the Liberals in that year’s federal election. 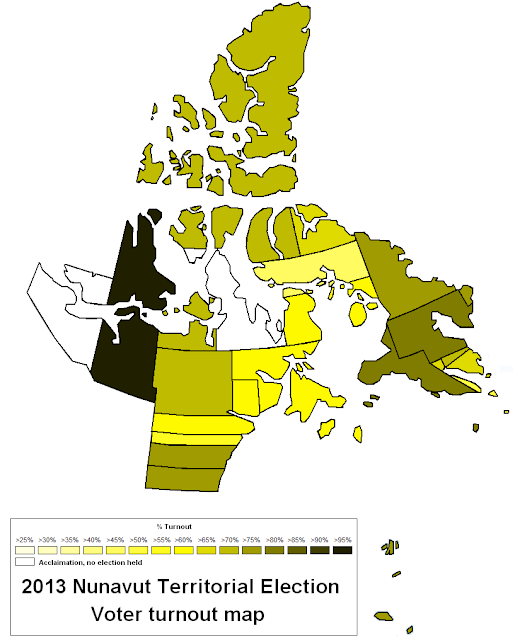 I rarely make a turnout map, but since there is so little to map in consensus government elections, I have made one. Plus, Nunavut has been known to have interesting turnout results. It is not uncommon to see districts with over 100% turnouts thanks to same day registration and lack of enumeration. This is exactly what happened to the riding of Cambridge Bay, which you will see is the darkest riding on my map (I used the 95%+ shade). The 2004 election saw 8 ridings with over 100% turnout Overall the turnout was 70%, which while quite high, is down from 71% in 2008 and down from 98% in 2004. Turnout was the lowest in the riding of Aggu, which saw just 49% show up to vote.

Email ThisBlogThis!Share to TwitterShare to FacebookShare to Pinterest
Labels: 2013, Nunavut