Much to my excitement, the Liberals have released riding by riding results of their leadership race which was released Sunday. As expected, Justin Trudeau won, but he won big- with 80% of the vote. Finishing second was MP Joyce Murray with 10% of the vote. Trudeau won across the county, and only lost 5 ridings- all in BC which Murray won.

Here is the map: 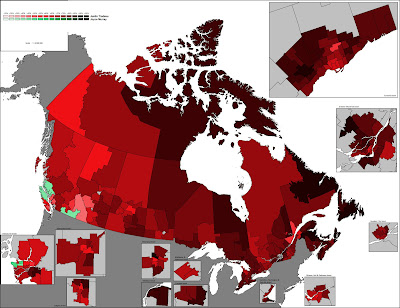 Trudeau did the best on the east coast, especially in Newfoundland, but also in areas with large minority communities. His weakest areas tended to be urban areas friendly to the NDP, where progressive Liberal voters may have been attracted to Joyce Murray. Murray did well in her home province, where she won 5 ridings, including her own. No other candidates won any ridings.