Following an unusual turn of events, voters in the provincial riding of Saint John East in New Brunswick will be heading back to the polls on Monday, after having just gone to the polls in September to elect a new member of the New Brunswick Legislative Assembly in the 2014 New Brunswick general election.  In that election, Liberal candidate Gary Keating defeated the incumbent, Tory Glen Savoie by a narrow nine vote margin, which had to be confirmed by a judicial recount. Just three weeks after having been elected, and before he was even officially sworn in, Keating decided he didn't want the job, as it would mean spending too much time away from his family.

And so, this by-election, not even two months after the general election, will stand as a very early test for the new Liberal government in the province, who have just came from winning a majority government with 27 seats to the Tories' 21.  The fate of the government won't rest on this one seat, but it will be interesting to see if the voters in the riding punish the Liberals for having had a candidate who was uncommitted to holding office.

Saint John East with its current boundaries was created in the most recent redistribution which occurred just before the last general election. It was formed from most of the previous Saint John East riding and part of Saint John-Fundy, where Glen Savoie was the MLA. Glen Tait, who was the MLA for Saint John East did not run in 2014.

Throughout its history, the riding typically votes for the party that forms government.  2003 is the most recent exception, as the Liberal's Roly MacIntyre picked up the riding despite the Tories winning the general election. Since Gerry Merrithew held the seat in the 1970s and early 1980s, the Tories have generally been weak in the riding. When they do win, it is with the help of a split opposition, as they have not won more than 40% of the vote here since 1982. The Liberals have cracked 40% on a few occasions, but only once did they themselves win a majority of support. This was in 2006, when they won 60%. One reason for the Liberals and Tories typically winning the seat with relatively low numbers is the higher than usual NDP vote in this riding. The NDP has only won the riding once (in a 1985 by-election), but typically gets around 20-25% of the vote.


In the general election, once again due to the strength of the NDP vote in the riding, neither the Liberals nor the Tories broke 40% of the vote, getting about 37% each. Despite a high profile province-wide campaign, the NDP result in the riding, 19%, is lower than normal for the party. Perhaps the Greens, who won 6% of the vote, ate into this. 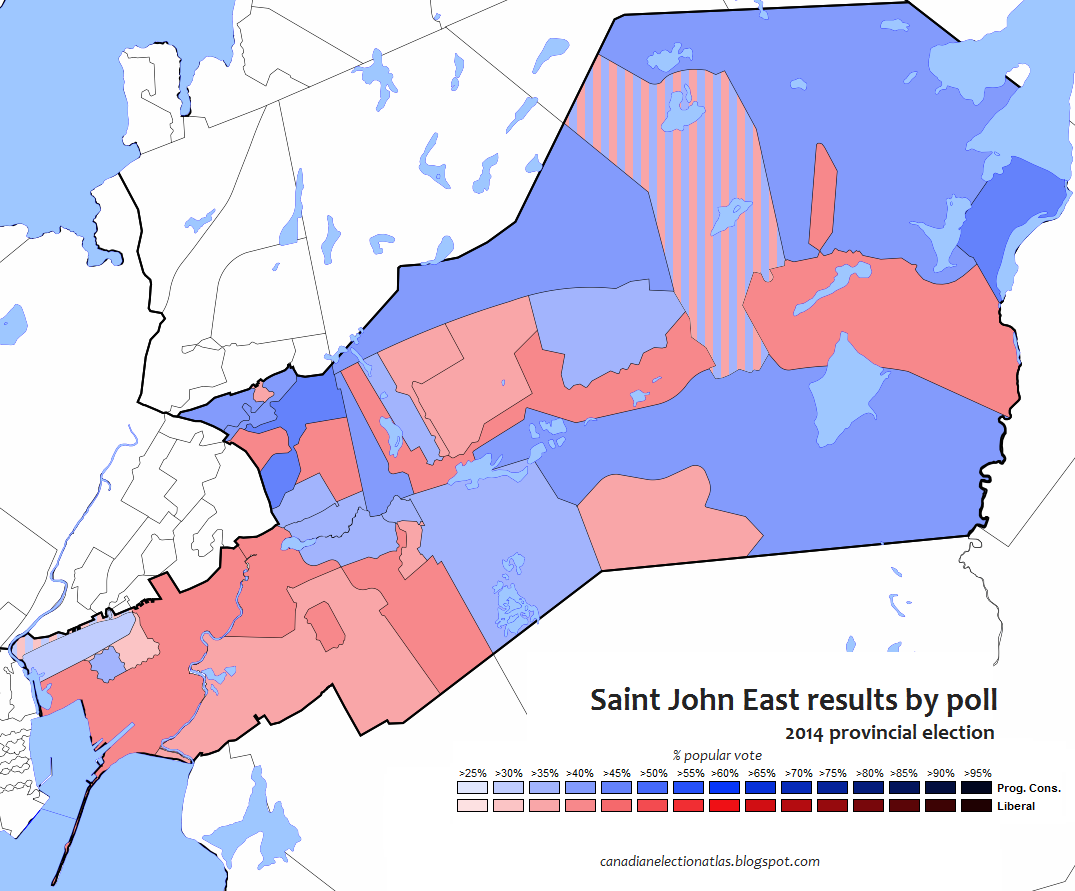 
Traditionally, there is an east-west divide in the riding. The Liberals are historically stronger in the older Saint John East neighbourhood and in Champlain Heights, which are both in the western part of the riding. The more suburban communities in the rest of the riding tend to be more Tory friendly.  NDP support is usually found in the same areas as the Liberals, and often do win a few polls in the old Saint John East area.


Following the results of the provincial election in September, then-NDP leader Dominic Cardy resigned as leader, as the party failed to win any seats. However, he was encouraged by party stalwarts to run in the by-election, perhaps in a last ditch effort to enter the legislature, after being shutout. Cardy stands a good chance, as the NDP has a strong base in this riding. Because the NDP didn't win any seats in September, a Cardy victory here is crucial for the New Democrats. It is also crucial because the party risks losing “third party status” in the minds of voters, as the Green Party managed to win a seat the September election, whereas the NDP didn't. For NDPers, this by-election is a “second chance” after a disappointing general election.

The shear closeness of the September general election in this riding means that the outcome of Monday's vote is anyone's guess. The Tories hope to win the seat back with Glen Savoie again, who represented part of this riding  from 2010 to 2014, and narrowly lost here in the general election. Challenging Cardy and Savoie is Saint John Deputy Mayor Shelley Rinehart who is running for the Liberals, and is definitely a better candidate than Gary Keating. The Greens look to build on their one seat in the legislature with their candidate, businesswoman Sharon Murphy, who was their candidate in September. Interestingly, none of the candidates actually live in the riding, although all are claiming some sort of connection to the area, with Cardy even promising to move there if elected.

We'll see what happens when polls close on Monday at 8pm (7pm Eastern).
Posted by Earl A. Washburn at 10:17 AM