Municipal elections are being held today across Prince Edward Island's 74 municipalities. Voters will elect mayors and councillors throughout Canada's smallest province. Elections Prince Edward Island conducts the races in the four largest municipalities in the province (Charlottetown, Summerside, Stratford and Cornwall). Elections in the remaining 70 municipalities (62 communities and 8 towns) are usually held in different years from the four largest municipalities, but this year will be held on the same date, as the province has aligned both election cycles in an effort to increase voter turnout and number of candidates.

In addition to the four largest municipalities, actual elections at all-day polling stations will be held in the towns of Alberton, O'Leary, Kensington, Borden-Carleton, North Rustico, Montague, Georgetown, Souris and in the communities of North Shore and Tignish. In the remaining communities, councils will be elected through “special election meetings” where nominations will be taken from the floor at community meetings tonight. 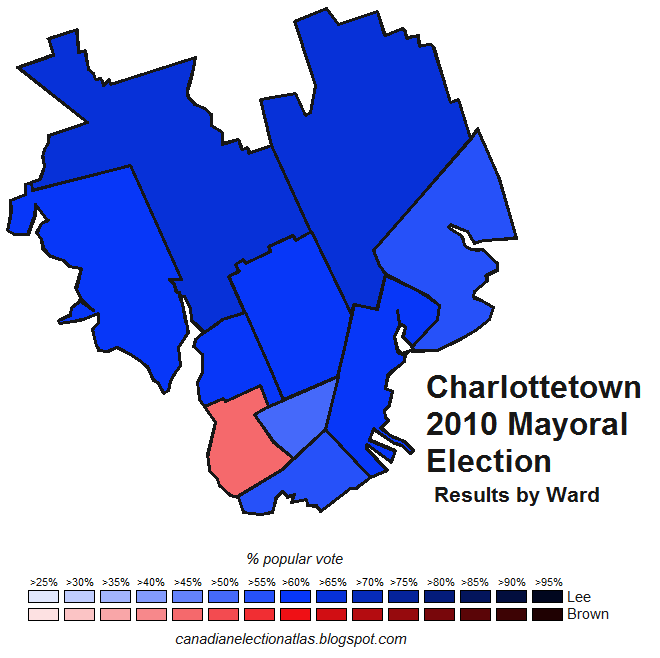 Charlottetown is seeing a re-match of the 2010 race between Tory incumbent Clifford Lee and former city councillor Philip Brown, who is currently a teacher. Clifford Lee has been mayor of Charlottetown since 2003. In 2010, Lee won 60% of the vote to Brown's 35%. That didn't stop Brown from winning a ward, Brighton Ward, which covers the Brighton neighbourhood west of Downtown. Brown just edged Lee by 40 votes in that area, which is a traditional Liberal stronghold in the city. Lee's strongest ward was Highfield Ward in the northwest corner of the city, where he won 66% of the vote. Highfield contains the Winsloe neighbourhood and part of West Royalty and is one of the more Tory-friendly parts of the city.

On council, there will be no election in Highfield Ward where councillor Jason Coady was acclaimed. There will be open races in Belvedere Ward, Brighton Ward and Spring Park Ward, where no incumbent is running. Of note, former councillor Mike Duffy (not the disgraced Senator!) is running in Belvedere.

In Summerside, incumbent Basil Stewart takes on Bill Martin. In Stratford, mayor David Dunphy has been acclaimed and there is an open race in Cornwall. Polls close at 7pm Atlantic. (6 Eastern)
Posted by Earl A. Washburn at 3:30 PM