In the 2011 provincial election, the Liberal Party of Newfoundland and Labrador won just six seats in the 48 member House of Assembly, and were nearly relegated to third party status, behind the NDP. They even finished in third place in the popular vote. Today, the Liberals have more than doubled their seat total, and are up to 14 seats. Tonight, they are likely to increase this to 16. Why? The rise of the Liberal brand across Atlantic Canada, coupled with the lack of popularity of both the governing Progressive Conservatives and the New Democrats in the province has allowed the Liberals to win all five by-elections held in the province since 2011, and have benefited from a number of floor crossings from both the Tories and the NDP. Today, there are to more by-elections in the province, and both are currently held by the PCs. They are in Trinity-Bay de Verde on the Avalon Peninsula, and Humber East on the west coast of the province.

Trinity-Bay de Verde has sat vacant since early in September, when the province's then-Finance Charlene Johnson resigned to move to Asia, where her husband works. Johnson was the youngest woman to ever be elected as an MHA in the province, and was the first member to give birth while in office. It will be a huge shift from managing the province's finances to being a stay-at-home mother in a different country.

The riding is made up entirely of small fishing villages along the coast of the Bay de Verde peninsula, which forms the northwest wing of the larger “H” shaped Avalon Peninsula. The riding begins at the Town of Salmon Cove on Conception Bay in the southeast, and consists of the entirety of the Bay de Verde peninsula north of this point. The riding ends at the community of Hopeall in the southwest, on Trinity Bay. None of communities have more than 1000 people. The largest municipality in the riding is Heart's Delight-Islington with 704 people. Salmon Cove (691) and Old Perlican (661) are the next largest municipalities. 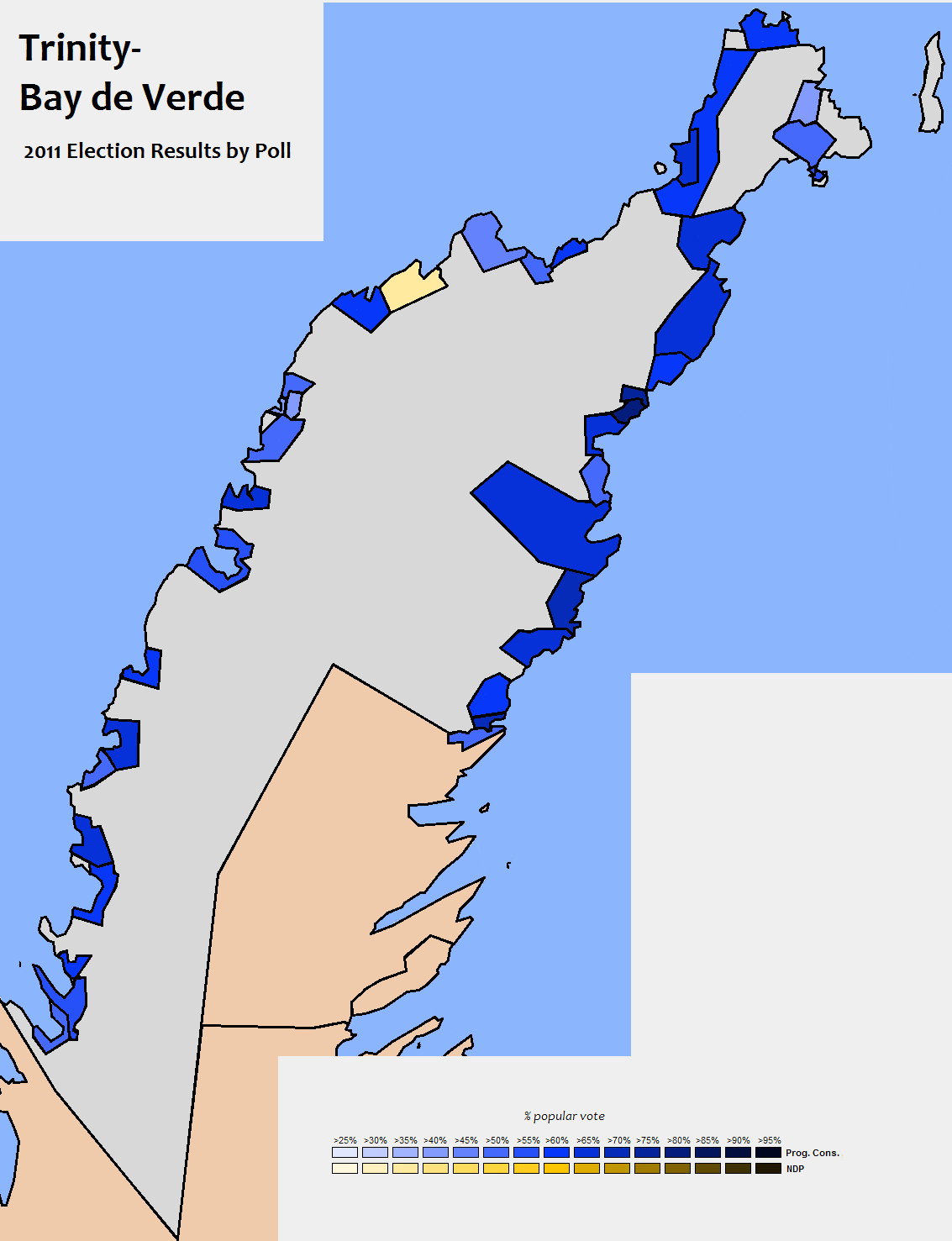 In 2011, Johnson won 62% of the vote in the riding. The Liberals finished second at 24%, and the NDP finished third with 14%. Johnson all but one poll in the riding, losing the community of New Chelsea to the NDP candidate, Sheina Lerman. The Liberals did not win any polls, despite placing second. Johnson's best area in the riding was the villages between Sprout Cove and Low Point along Conception Bay, where she won over 69% of the vote. Her weakest part of the riding was the Winterton/Turk's Cove area on Trinity Bay, where she won 49%. This was the best area for the Liberal candidate, Barry Snow, who won 32% there. Federally, the Bay de Verde peninsula is the most Liberal part of the entire Avalon Peninsula.

Running for the Liberals is Steve Crocker, who is the assistant to Liberal leader Dwight Ball. Running for the Tories is Ronald Johnson, the father of the outgoing MHA. Running for the NDP is Tolson Rendell, who is a town councillor in Heart's Content, a small community on Trinity Bay. As the riding is a bellwether, and with the Liberals way ahead in the polls in the province, there is no doubt in my mind that the riding will be picked up by Crocker. After all, the next-door riding of Carbonear-Harbour Grace was recently won by the Liberals in a by-election, after the Tories won it by an even larger margin than Trinity-Bay de Verde in 2011.

Tom Marhsall, Newfoundland's interim Premier before Paul Davis took over in September, not only resigned from the interim premiership, he resigned his seat as well, Humber East. This riding is located in Western Newfoundland, taking in the eastern half of the City of Corner Brook, and extending eastward to include part of the town of Pasadena. While the riding contains a handful of communities in between Corner Brook and Pasadena, the overwhelming majority of the population lives in Corner Brook. The riding is named for the Humber River, which bifurcates the riding, running from Pasadena to Corner Brook.

With Marshall winning easily in 2011, it stands as no surprise that he easily won every poll in the riding in 2011. Not only that, he won every single poll with at least 62% of the vote. Marhsall's strongest part of the riding was in the Corner Brook suburbs, winning 83% in Massey Drive and 84% in the Wheeler's Road / Elizabeth Drive area. His weakest area was the community of Humber Village, located halfway between Corner Brook and Pasadena, where he won 73% of the vote. Across the Humber River from Humber Village is the community of Little Rapids, where the NDP did the best, winning 20% of the vote. Steady Brook, a ski resort (as close as one can get to a ski resort in Newfoundland) just east of Corner Brook was the Liberals' best area, where they won 10%. Federally, this area is safe Liberal territory. The Tories have not won any polls in Humber East since 2000 (winning just 2), and have not done well in the area since 1997.

Out of all by-elections held since 2011, Humber East is the riding that saw the best result for the Tories, and the worst result for the Liberals. The Liberals have been able to pick up four ridings from the Tories since 2011, but none have been safer for the Tories than Humber East. Having said that, other than it being a safer Tory seat than most, I don't see why the Liberals can't eke out a victory even here, as it has gone Liberal in the past, and it's very Liberal on a federal territory. Running for the Liberals is businessman Stelman Flynn, the former president of hospitality Newfoundland and Labrador. Hoping to stop the Liberal onslaught is the PC candidate, Larry Wells, who is the longtime executive assistant to Tom Marshall. The NDP is running Pasadena resident Martin Ware, a retired English professor at the Grenfell Campus (in Corner Brook) of Memorial University.

Email ThisBlogThis!Share to TwitterShare to FacebookShare to Pinterest
Labels: 2011, 2014, by-elections, Newfoundland and Labrador