Manitobans are heading to the polls today in what will be an historic provincial election. If all the polls are correct, then voters are set to elect a Progressive Conservative government in a landslide election, kicking out the governing NDP, which has run the province since 1999, winning four straight majority governments in the process.

Polls are suggesting the PCs are hovering around 50% in the popular vote, which would be their highest vote share since 1910. If they get a few points higher than that, it would be their highest vote share in the province's history. This means that the Tories will be winning seats they have never won before, some of them quite easily, like Brandon East, Interlake and Selkirk. The NDP meanwhile is polling in the mid-20s, which would be their worst result since 1988. The Liberals on the other hand are just looking to gain back relevancy. After winning just one seat and 8% of the vote in 2011, they are now polling in the mid-teens, and could see their best result since 1995. The Greens are also polling well, averaging at 8%, which would be their best result ever.

This has been an election of awful leaders. NDP Premier Greg Selinger is coming off of last year's controversial leadership election, which followed a caucus revolt. Selinger won the election by a narrow result, thanks in part to the backing of major unions in the province. Not only that, Selinger is carrying 17 years of governing baggage behind him. The man who will become Premier, PC leader Brian Pallister is carrying baggage of his own. Many see him as being too right wing for the province, and is currently embroiled in a scandal in where it was discovered he had been to Costa Rica 15 times since 2012, and had lied about his travels. As for Liberal leader Rana Bokhari, she has run a lacklustre campaign which included an awful debate performance. At the beginning of the campaign, the Liberals had been polling ahead of the NDP for second place, but have now fallen considerably behind. The only leader that seems to be popular is Green Party head, James Beddome, who will definitely benefit from a high protest vote this election. 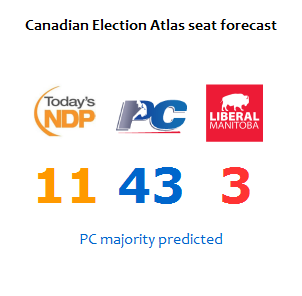 For my riding predictions, I have come up with a “rating” for each riding (safe, likely, lean or toss up), which rates how comfortable I am in my predictions for each seat. I've made these ratings by using recent regional poll numbers and comparing them to the last provincial election as well as an average result of the last provincial and federal elections (see maps below). In taking a look at both elections, I feel I have a way to identify any abnormal riding results, and account for this in my predictions. Where my numbers contradict each other in a riding, or where they show a close race, I've declared the seat a “toss up” and offered my gut prediction in that riding, based on its history and its candidates. I've also taken into consideration a couple of riding polls that have come out over the course of the campaign. 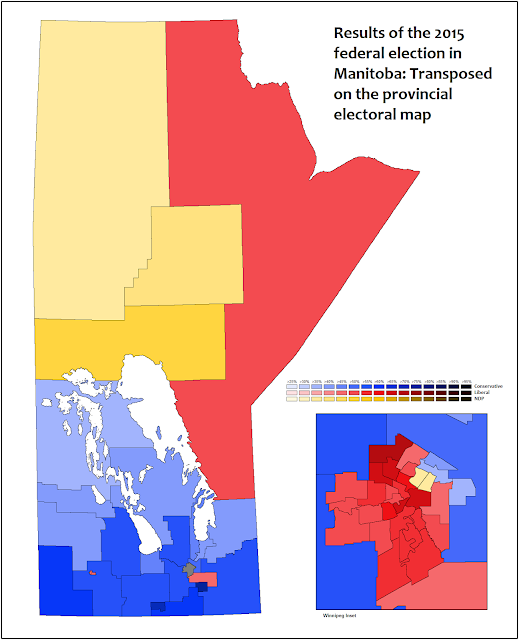 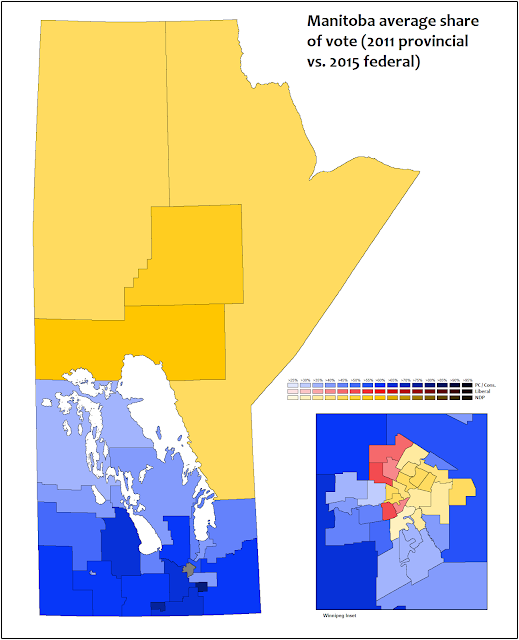 Polls are suggesting the Tories are winning about two-thirds of the vote in rural Manitoba, which means they will likely sweep all of rural southern Manitoba (including Brandon), leaving the NDP to their northern stronghold (though they could close Flin Flon to the Liberals). In Winnipeg, polls indicate that the Tories have at least a 15 point lead over the NDP, which will see the PCs win back their former suburban strongholds in the south and west ends, and eat into traditional NDP territory in the north and east of the city. This will reduce the NDP to their stronghold in the central and north central parts of the city. Meanwhile the Liberals should hold on to their lone seat of River Heights, and maybe pick up one or two more seats thanks to vote splits. The Greens may also win a seat or two.

Here are my seat by seat ratings. Ridings are coloured in by how they voted in 2011.

I've identified ten ridings as “toss ups” - ridings where my numbers have shown a close race. For each of these ridings I went with my gut (with detailed reasoning) as to how I believe they will go:

Concordia: This north Winnipeg riding is being defended by incumbent NDP MLA Matt Wiebe, who has represented the seat since 2009, when he took over the riding from its predecessor, former Premier Gary Doer. The seat has voted NDP in every election since it was created in 1981. Wiebe won the seat in 2011 by 35 points, and it is one of only five provincial ridings to go NDP in the last federal election. On paper it is a safe NDP seat, but with the amount of swing the polls are predicting, this riding could be in play. I'm still predicting the NDP to hold on though.

Elmwood: Right next door to Concordia is Elmwood, which is being defended by long-time NDP MLA Jim Maloway, who has held this seat from 1986 to 2008 and since 2011. This riding has also voted NDP (and its predecessor, the CCF) in every election since it was created in 1958. The result in the last election in this seat was relatively close though, with Maloway defeating his Tory opponent by 21 points. One glimmer of hope for the NDP is that they did win the transposed federal result here. However, my numbers show the PCs winning this seat in a close result, which is why I am predicting they will win it.

Flin Flon: This riding, located in northwestern Manitoba will see an interesting race, as its defending MLA Clarence Pettersen is running as an independent, after he lost the NDP nomination. Flin Flon has been an NDP seat since 1969, but Pettersen's candidacy is expected to split the NDP vote. In the federal election, the NDP won Flin Flon over the Liberals by a slim margin, suggesting the Liberals could be the party that has the best chance at benefiting from the split. The provincial Liberals are also polling better than the NDP in rural Manitoba. This is why I think they will win the seat.

Fort Garry-Riverview: The NDP won this central Winnipeg seat in 2011, but this should be a Green-PC race. Green Party leader James Beddome is running in this riding, and of the four party leaders, he has the highest approval ratings. The Greens are polling quite high in the city (around 10%) which is enough to put this riding in play. Without riding polling, Green Party targets are hard to predict, so it is hard to say whether Beddome will win this seat. I'd prefer to hedge my bets though, and go with the PCs here, who could come up the middle against a divided progressive vote.

Fort Rouge: This central Winnipeg seat is the riding where Liberal leader Rana Bokhari has chosen to run. A riding poll from the beginning of the campaign showed a three-way race with Bokhari ahead of the PC candidate by just two points. At that point in the campaign the Liberals were doing much better in province-wide and city-wide polling, but now they are doing much more poorly. It is entirely possible that this drop in Liberal fortunes has happened in Fort Rouge as well. The NDP is running a star candidate in First Nations musician Wab Kinew, and I predict that this split in the non-PC vote could cause the Tories to come up the middle and win this seat for the first time since 1969.

St. Johns: My numbers suggest a tight NDP win in this north-end riding, but what will make it hard for the New Democrats to keep this seat is the fact that incumbent MLA Gord Mackintosh has decided to retire, making this an open seat. This seat has been won by the NDP, and its predecessor the CCF in every election since it was created in 1958, and Mackintosh won the riding in 2011 by an impressive 44 point margin. Because of these factors, I believe the NDP will manage to hang on to this seat.

The Maples: This ethnically diverse riding in the northwest corner of Winnipeg has had a history of electing Liberals to the provincial government, but none since 1995. A rebound in Liberal fortunes suggests that they will be competitive there, but will it be enough for them to win? The NDP, which holds this riding, is hoping for a split in the anti-NDP vote in order to hold on to the riding. However, I believe the surging Tories will pick this up, thanks to a split in the anti-PC vote, winning this riding for the first time ever.

Thompson: Way up in the north of the province is the riding of Thompson, which has been held by the NDP's Steve Ashton (who had challenged NDP leader Greg Selinger in last year's leadership election, following a caucus revolt) since 1981. The riding has only voted for the Tories once in its existence, in 1977. However, my numbers suggest that this riding may be in play. It is hard to fathom the PCs winning this seat though, considering Ashton won it by 40 points in 2011, and his daughter, Nikki won Thompson in last year's federal election. Because of this, I think the NDP will hold on to the riding.

Tyndall Park: The Liberals came a close second in this northwest Winnipeg seat in the last election, losing to the NDP's Ted Marcelino by a 10 point margin. Because of this, my numbers are suggesting a narrow Liberal win here. Though, with their faltering campaign, it is not a given, and either the NDP or the PCs might be able to win it as a result. Though, I think I will trust my numbers and predict a Liberal win here.

Wolseley: This central Winnipeg seat saw the Green's best result in 2011, when their leader, James Beddome won 20% of the vote, coming in second place. Beddome chose to run in Fort Garry-Riverview though, but the Greens are still running a star candidate in environmentalist David Nickarz in this riding. NDP MLA Rob Altemeyer defeated Beddome by a 40 point margin in 2011, a difference that will be very hard for Nickarz to overcome. It is hard to predict insurgent Green campaigns, and so I will play it safe and predict an NDP hold here.

While losing will obviously be bad news for the NDP, it will mean finally getting rid of Selinger, and replacing him with a stronger leader. Also, beating out the Liberals for second place would be a minor victory, as we know from the results of the federal election, Manitobans would be quite willing to vote Liberal with the right leader, and a third place finish for the NDP would be a disaster for them.

As for the Tories, many people are suggesting it could be a “one and done” government for the party, due to weaknesses of Brian Pallister. He is being likened to former PC Premier Stirling Lyon who only lasted one term, before voters ditched his government in 1981. But, we may be getting ahead of ourselves here.

For the Liberals, they would be wise to ditch Bokhari as leader, though she will want to hang on if they make any seat gains. However, she will probably have to keep her seat first!

For those who want to follow the results, the polls close at 8pm Central Time, which is 9pm Eastern.
Posted by Earl A. Washburn at 12:44 PM