Today is election day across Nova Scotia's 51 municipalities, as voters go to the polls to elect new mayors, councils and members of the province's eight school boards.

The second form of municipalities are towns, which are very small in geographic size compared to the regional municipalities and the counties and municipal districts. There are 27 towns in Nova Scotia. Each are headed by mayors, elected at-large and have a number of councillors.

In the Halifax Regional Municipalty (recently re-branded as just “Halifax”), Atlantic Canada's largest city, the result of today's mayoral election is a foregone conclusion. Mayor Mike Savage, the former Liberal MP for Dartmouth—Cole Harbour (2004-2011) has finished his first term as mayor of the city, and will likely enjoy being re-elected into a second term in the same fashion that most mayors are re-elected in Canada for their second terms, that is in a large landslide. He is only being challenged by one opponent, businesswoman Lil MacPherson who is challenging the centrist mayor from his left. She is the owner of a local organic restaurant. Only one poll of the race was conducted, back in the summer, showing Savage had a commanding 85%-15% lead over MacPherson. 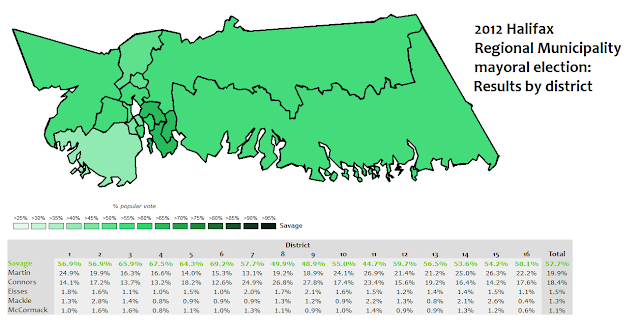 
On regional council, four of the city's 16 districts have open races, that is the incumbent in those seats have decided to retire instead of running for re-election. The four districts are District 1 (Waverley-Fall River-Musquodoboit Valley), District 5 (Dartmouth Centre), District 8 (Peninsula North) and District 12 (Timberlea-Beechville-Clayton Park West-Wedgewood). There will be no elections in District 3 (Dartmouth South-Eastern Passage), District 4 (Cole Harbour-Westphal), District 15 (Lower Sackville) and District 16 (Bedford-Wentworth) as the incumbents there have been acclaimed.

The mayoral race in the Cape Breton Regional Municipality will be a re-match of the 2012 election between Cecil Clarke and Rankin MacSween. Clarke served as the MLA for Cape Breton North from 2001 to 2011 for the Progressive Conservative Party before being elected mayor in 2012. MacSween is the head of a community economic development agency. 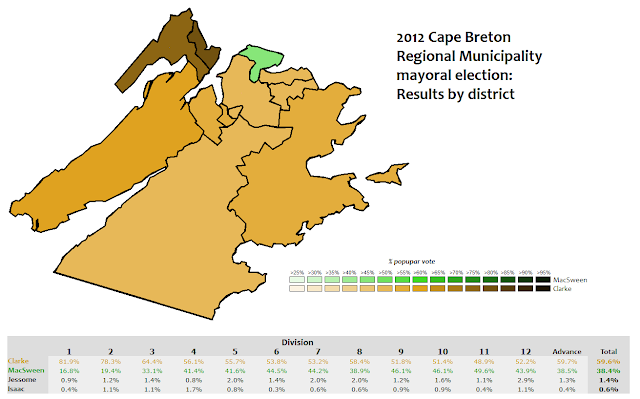 In 2012, Clarke defeated MacSween by a 59%-38% margin with three minor candidates winning the remaining 3%. I was lucky to be sent the results by district by the region's elections office, though the results by district may be a bit misleading, as over half of all voters voted in advance and did not have their votes recorded by district. Nonetheless, of those voting on election day, Clarke won all but one district in the region. He was especially strong in the Sydney Mines and North Sydney areas (Districts 1 and 2), which cover the provincial riding he represented. The one district he lost was District 11, which covers the New Waterford area. MacSween won the district by just 0.7% of the vote. The New Waterford area has historically been a very strong region for the NDP in provincial elections.


Cape Breton has a 12 seat municipal council, which only saw a minor boundary change since the last election. Every seat in the region will see a contested race, and four districts will have open races, including District 10 where disgraced former Liberal MLA Dave Wilson is running.


The third largest municipality in Nova Scotia is actually Kings County, located on the Bay of Fundy in the Annapolis Valley. It includes the communities of Greenwood, Kingston and New Minas just to name a few. The county is seeing its first ever mayoral election, as it has switched from having a warden-council system to a mayor-council system. County warden Diana Brothers has opted to run for re-election in District 5 instead of running for mayor. Running for mayor of the county are four candidates: Rick Ackland, Dick Killam, Peter Muttart and Laurie Porter. Muttart is a county councillor representing the Port Williams area. Killam has also sat on council in the past, as has his wife. Rick Ackland is a retired lawyer who ran for a council seat in 2012, but had his candidacy disqualified. Porter does not appear to have an active campaign.

In addition to ditching the position of warden, the county has also reduced the number of council districts from 12 to nine, reducing the size of council from 13 members to ten. Due to a number of retirements on council however, no district is seeing more than one councillor run against each other.


The province's fourth largest municipality is Colchester County, which is in the northern part of the province, stretching from the Bay of Fundy to Northumberland Strait and completely surrounding the Town of Truro. Among other communities, it includes the villages of Bible Hill and Tatamagouche. Bob Taylor has been the county's mayor since 2008 and was re-elected by acclamation in 2012. Taylor is a Liberal, having run for that party in the 2006 provincial election in the riding of Colchester North. Unlike in 2012, Taylor is not running unopposed for the mayoralty this time. Councillor Christine Blair has entered the race against Taylor. She represents District 1 on council, which covers the Bible Hill and Brookside communities.

Colchester County has 11 districts on council, most of which will not be seeing elections as their incumbents have been acclaimed, or in one case (District 1), a non-incumbent was the only candidate to offer. Elections will only occur in two districts: District 2 and District 11.


Those are the four biggest municipalities, but there are other races being held right across the province of course. Polls close at 7pm Atlantic time (6pm Eastern).
Posted by Earl A. Washburn at 9:30 AM