Here is a look at the elections in Saskatchewan's three largest cities:


The most exciting mayoral race in the province will be in the province's largest city of Saskatoon. There are three main candidates running for mayor, and polls are showing a close three-way race between them. The front-runner is mayor Don Atchison, who has been mayor of the city since 2003. Atchison, an outspoken conservative, could squeak out a victory thanks to a split in the vote on his left between his main two rivals: city councillor Charlie Clark and businesswoman Kelley Moore. Clark, who has NDP connections, is the more progressive of the candidates, and represents the city's most left wing ward, Ward 6, which covers the Downtown and Nutana neighbourhoods of the city. Moore on the other hand is running on a more centrist platform, highlighting fiscal responsibility and sustainable planning in her platform. Both Mainstreet Research and Insightrix have released recent polls of the race, and show contradictory results. Both pollsters show Atchison with the lead; Mainstreet gives Atchison 38% and Insightrix has him at 35%. Both pollsters differ on who is in second place, though. Mainstreet has Clark in second place at 33%, while Insightrix has Moore in second place, just one point behind Atchison at 34%. Mainstreet puts Moore further behind at just 25%, while Insightrix has Clark in a close third place at 30%. These contradictory poll numbers mean that it will be difficult for anti-Atchison voters to pick a candidate if they want to get rid of the mayor. On the other hand, it may trigger centrist Moore supporters to vote Atchison to stop Clark.

The 2012 election in Saskatoon was also an exciting race, but between just two main candidates: Atchison and public servant Tom Wolf. Wolf, a public servant, ran on a pragmatic centre to centre-left platform. Atchison squeaked out a narrow five-point victory over Wolf, and the two candidates split the city's ten wards, with each candidate winning five. Atchison won the five suburban wards located on the southern, eastern and northern edges of the city, with his best ward being Ward 9 in the city's southeast corner, picking up 61% of the vote there. Wolf's best ward was Ward 6 in the centre of the city, where he won 60% of the vote. 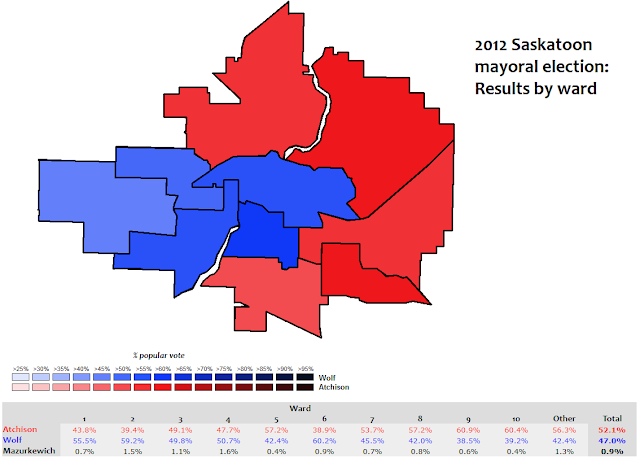 Looking at Saskatoon's city council race, there are three wards which will have open races with no incumbents: Ward 6 (Charlie Clark's seat), Ward 8 and Ward 9. The incumbent in Ward 8 was Eric Olauson, who was elected in the provincial election earlier this year for the Saskatchewan Party. The incumbent in Ward 9 is Tiffany Paulsen who had run for the Liberal Party in the 2004 federal election. The ward map for 2016 has changed slightly, as the city has annexed some new territory.


Unlike the race for mayor of Saskatoon, the mayoral election in Regina has been more of a snooze-fest. One-term incumbent mayor Michael Fougere is set for a landslide election, as is customary for popular mayors heading into their second elections. The conservative-leaning Fougere had been a long time city councillor representing Ward 4 in the southeast corner of the city. He was first elected as mayor in 2012 with just 42% of the vote, thanks to a split in the progressive vote between candidates Marian Donnelly and Meka Okochi. Fougere won seven of the city's ten wards en route to his re-election, while Donnelly won the remaining three. The seven wards that Fougere won are all located in the city's more conservative-leaning suburbs, while Donnelly won the city's three inner-city wards. Fougere's best ward (and the only one where he won a majority of the vote) was his home Ward 4, where he picked up 58% of the vote. Donnelly's best ward was Ward 3, which covers the city's Downtown. Donnelly would win 55% of the vote there compared to just 20% for Fougere. Okochi's vote was generally even across the city, and he failed to win any wards.

For 2016, Fougere should have no problem winning every ward in the city, if the only poll of the race is to be believed. A Mainstreet Research poll conducted earlier this month showed Fougere way ahead at 73%, while his four opponents are all in single digits. His main opponent will likely be Tony Fiacco, brother of former mayor Pat Fiacco and former Saskatchewan Party candidate. The left wing vote will be split between three candidates: businessman Wayne Ast, perennial mayoral candidate Jim Elliott and former Green Party candidate and topless rights activist Evangeline Gordron. The Mainstreet poll put Fiacco at 9%, Ast and Elliott at 8% and Godron at 2%. 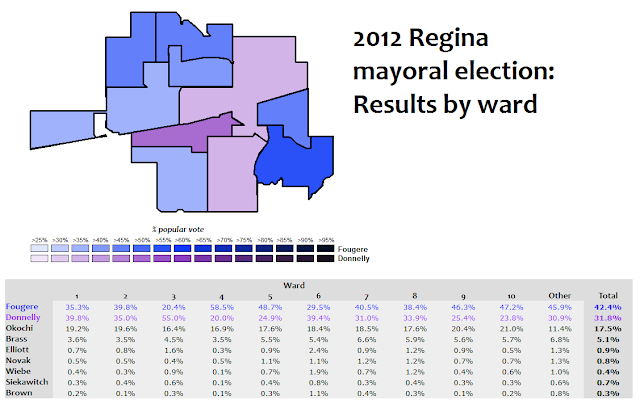 Regina City Council has 11 seats, with ten ward councillors plus the mayor. Of the ten wards, just two will have open races with no incumbents: Wards 3 and 6. Of note, Ward 6 has a total of 9 candidates running. The city of Regina annexed some new territory since the last election, and as such the ward map was tweaked slightly.


In Prince Albert, one-term mayor Greg Dionne is being challenged by Ward 6 city councillor Martin Ring, peace advocate Conrad Burns and former junior hockey player Josh Morrow whose campaign has been criticized for being “Trump” like for its “American-style” incivility. Dionne, who was a city councillor before becoming ways, was first elected to lead council in 2012 when he defeated then-incumbent mayor Jim Scarrow by nearly 1100 votes. Dionne won every ward in the city, doing especially well in the more NDP-friendly wards (1, 2, 3 and 4), which cover the northern and central parts of the city. His best ward was Ward 1, where he won 58% of the vote. His worst ward (and Scarrow's best ward) was Ward 5, where he still beat Scarrow by a 47-44% margin. His worst wards are all located in parts of the city that tend to vote for the Conservatives in federal elections and the Saskatchewan Party in provincial elections. 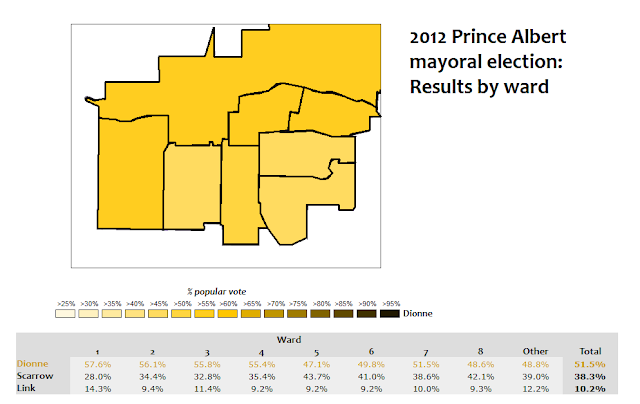 Prince Albert's city council has nine seats (eight councillors plus the mayor). Wards 6 and 7 have no incumbents running for re-election as Ward 6 councillor Martin Ring is running for mayor and Ward 7 has been vacant since January when its representative resigned for personal reasons. Ward 8 will have no election, as councillor Ted Zurakowski has been acclaimed.

Polls close at 8pm Central Standard Time in most municipalities. Saskatchewan doesn't have daylight saving time, so there is a 2 hour difference, meaning the polls close at 10pm Eastern.