Newfoundlanders and Labradorians head to the polls tomorrow to elect the municipal governments across the province’s 277 towns and three cities (St. John’s, Mount Pearl and Corner Brook). Up for election are just the municipal councils- electing mayors, councillors and in some cases deputy mayors.

Elections will not be held in numerous communities due to the entire council being acclaimed, as well elections are being deferred in the communities of Duntara, Keels, King’s Cove, Lamaline, Lark Harbour, Little Bay Islands, Lord’s Cove, Lourdes, Nipper’s Harbour, St. Paul’s, Summerford and York Harbour (and possibly others as well).  Some communities such as Anchor Point, Englee and Conche have fewer candidates than positions available.

Among the province’s largest communities (over 5000 people), the towns of Clarenville, Gander, Grand Falls-Windsor, Labrador City, Marystwon and the City of Mount Pearl are all seeing their mayor’s re-elected by acclamation.

As St. John’s is by far the largest city in the province, and the province’s capital, most of my focus on tomorrow’s election will be there. St. John’s has an 11 member city council consisting of the mayor, deputy mayor, five councillors elected from each of the five city wards, as well as four councillors elected on an at large basis. There will be no election for Ward 1 councillor, as incumbent councillor Danny Breen has been acclaimed. Both the mayor and deputy mayor positions are elected separately on an at large basis.

The race for mayor will be the most closely watched race in the province, as it pits two partisan camps against each other. There are no municipal parties in the city, but the partisan leanings of both major candidates are quite obvious. The incumbent mayor, Dennis O’Keefe is a member of the provincial Progressive Conservative Party, and his main opponent, Sheilagh O’Leary was endorsed by federal NDP leader Thomas Mulcair. (Being endorsed by a federal party leader is unheard of in municipal politics). There is a third candidate as well, Geoff Chaulk, who is a mental health advocate- but is not expected to contend. 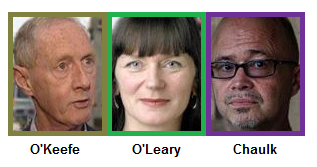 O’Keefe has been mayor of St. John’s since 2008, and previously was the city’s deputy mayor (2005-2008) and at-large councillor (1997-2005). Before entering politics, O’Keefe was a teacher. He was first elected as mayor in a 2008 by-election, where he defeated Marie White, a former deputy mayor. O’Keefe was re-elected in 2009, when he defeated Deputy Mayor Ron Ellsworth, 57%-37%. Ellsworth is re-entering politics in this election, as he is running for the open seat of deputy mayor.

O’Keefe’s main opposition comes from Councillor Sheilagh O’Leary. A businesswoman and photographer by training, O’Leary was elected as an at-large councillor for the first time in 2009. Not only did she win a seat on council, she topped the list for the position, winning 6500 more votes then the next candidate. She even won more votes than O’Keefe did-although this would be comparing apples to oranges as voters get four votes for at large council.

An Abacus Data-VOCM poll was conducted earlier this month that showed O’Keefe leads O’Leary 60%-39%, with Chaulk at 1%. However, 30% of those polled were undecided. In the Deputy Mayor race, Ron Ellsworth leads his opponent, transgender activist Jennifer McCreath by 59%.

The 2009 election was less polarizing, as the two main candidates were conservative oriented. Deputy Mayor Ron Ellsworth, who was O’Keefe’s main opposition often clashed with O’Keefe on council on spending matters, perhaps putting him to O’Keefe’s right. A third candidate, Mark Wilson- the leader of a popular local reggae band also ran in the race. While a fringe candidate, Wilson was the only left of centre candidate in the race, and won 6% of the vote.

Special thanks to the City of St. John’s elections office who sent me the ward-by-ward results of the 2009 mayoral race (data not found on the web). The results show that O’Keefe won all 5 wards, but the race in Ward 4 was fairly close, and the only ward where O’Keefe did not win a majority.

O’Keefe’s support was strongest in the more suburban west end of the city (ward 3), and the suburban/rural
/remote Ward 5, which covers the sparsely populated expansive southern 3/4ths of the city. Ward 4 was O’Keefe’s weakest ward. This ward covers the semi-suburban northern part of the city, which also includes Memorial University. This ward was also Ellsworth’s strongest ward. Wilson’s strongest ward by war was Ward 2, which covers the city’s downtown core. This must be where the city’s reggae fans are concentrated.

With O’Keefe having a large lead over O’Leary, he will in all likelihood win all 5 wards of the city. However, if O’Leary is to win any ward, it will likely be Ward 2, which takes in the more progressive downtown. Ward 2 encompasses a large portion of the provincial riding of Signal Hill-Quidi Vidi, which the NDP has held for 23 years.  The more suburban wards cover more Tory friendly areas, which should be strong areas for O’Keefe.

We’ll find out the results tomorrow evening when polls close on 8pm (6:30 Eastern).