2013 Nova Scotia election: A look at the new electoral map of the province.


On Saturday, Nova Scotia Premier Darrell Dexter announced that Nova Scotians would be heading the polls on October 8, ending months of speculation as to when the province would be going to the polls. Dexter currently leads the first N.D.P. Government in provincial history, which was elected in 2009. Going into Saturday's announcement, his party trails the Liberals by 10 points, according to the most recent CRA poll conducted in August.

The 2013 election will be fought on new boundaries, which were drawn up last year, amid some controversy. The election will fought in 51 ridings, instead of the 52 that were contested last election. Rural Nova Scotia will be losing three ridings, while the Halifax Metro area will be gaining 2 seats. The Halifax Regional Municipality is the fastest growing census division in the province (increasing 4.7% between 2006 and 2011), while all but six census divisions (counties) in Nova Scotia are seeing a decrease in population. Nova Scotia as a whole saw an increase of just 0.9% between censuses.

The biggest controversy surrounding the boundary changes was due to the fact that four specially designated ethnic ridings (three Acadian, and one African Nova Scotian) were to be abolished. These four ridings were significantly underpopulated, as their existence was to give minority groups representation in the legislature. This fact may not be backed up by reality however, as the African Nova Scotian riding, Preston- is currently represented by a White MLA (but has in the past elected MLAs of African descent, including a New Democrat). The government was criticized, because they passed legislation recommending that all ridings be of equal size, which meant that these four ridings, all held by opposition parties would be abolished (i.e. merged into neighbouring ridings). The Liberals and Tories opposed the plan.


In addition, the ridings of Glace Bay and Yarmouth had by-elections since 2009, but their boundaries have not changed, so there was no need to find the redistributed results, just use the 2009 results in those ridings.
The Elections Nova Scotia redistributed results show the NDP winning Antigonish, the Liberals winning Inverness, the Liberals winning Yarmouth and the Tories winning Northside-Westmount. However, this is due to the by-elections that happened since the last election. In 2009, these four new ridings would have all gone PC except Northside-Westmount which would have gone NDP (surprisingly, since its predecessor riding, Cape Breton North went PC). 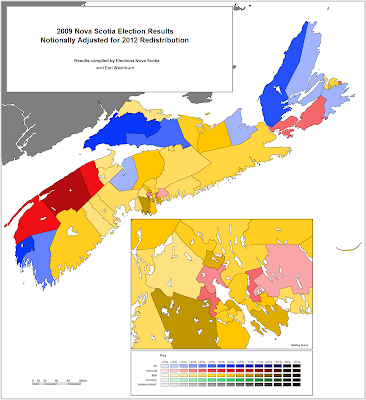 
As mentioned, rural Nova Scotia loses three seats. One in Cape Breton, one in West Nova, and one on the south shore. Two are gained in the Halifax Regional Municipality (HRM). While the loss of a seat in the South Shore means a loss of a seat for the NDP, this is gained by a favourable redistribution in Cape Breton which would give them the new riding of Northside-Westmount, plus the addition of the two new HRM ridings which would have gone NDP. The Liberals lose two seats, one in West Nova and one in Cape Breton. The Tories’ loss goes to the NDP as the former Cape Breton North riding which was won by the PCs has taken a chunk out of the former riding of Cape Breton South which went Liberal, but the had the Tories finish a distant third. The result gives the NDP a narrow notional win.

While it is clear the NDP have the advantage on paper thanks to these new boundaries, only time will tell if this will help them on Election Day. The way polls are going for the NDP, they will need more than just the extra two ridings they would have gained thanks to redistribution to win the election in October. However, the way pollsters are low-balling incumbent parties in recent elections across the country, anything can happen. In the coming weeks of the campaign, look to this site for cartographic projections of the polls, as I attempt to map the outcome of the election.