In keeping on the subject of New Brunswick, I musn't forget to mention that the province is having a by-election tomorrow. All eyes will be on the voters in the riding of Rothesay, a suburban riding north of Saint John. The riding has been sitting vacant since its previous MLA, Progressive Conservative Margaret-Ann Blaney resigned a month ago to become CEO of Efficiency New Brunswick.

It is precisely that appointment that Tory Premier David Alward made that has become the issue of the campaign. Efficiency NB is crown corporation, and Blaney's appointment is seen as blatant patronage. However, aside from that, Alward is still fairly popular in the province and Rothesay is a traditional Tory seat.

As mentioned, the riding is located north of the province's largest city, Saint John, and is mostly a suburban riding. Most of the riding consists of the suburban City of Rothesay, but it also consists of of a small part of Saint John (Dury Cove) and parts of neighbouring rural parishes. Politically, the riding has mostly voted for the Tories in its history. Since 1974, the area has voted for the PCs 7 times, and the Liberals just three times. The Liberals only held the seat from 1987 to 1999. The Liberals happened to win every seat in the province in 1987, and benefited from a split in the right wing vote in the 1991 and 1995 elections, when the populist Confederation of Regions Party ate into the Conservative vote. Since 1999, the Tories have usually receive around 50% of the vote in the riding.

Tory strength in this riding is fairly wide spread. In the 2010 provincial election, they won every single poll in the riding. The Tories were the strongest in the north side of the city, while the only polls where they did not get 50% of the vote were in the south, less built up parts of the city. In this election, the Liberals were their main opponent, but they didn't win any polls.

Federally, in the 2011 election, the Tories picked up all but one poll in the area. The Liberals finished 3rd in the polls in Rothesay, while the NDP finished 2nd. The only non-Tory poll was won by the NDP. This one poll is located on the northern border of the city, and was won by the NDP by just one vote. The area consists of some small apartment buildings. This north end of the city was still dominated by the Tories, but the NDP did fairly well there too, breaking 30% in most polls. The Tories did less well in the south again, where the Liberal candidate did well. 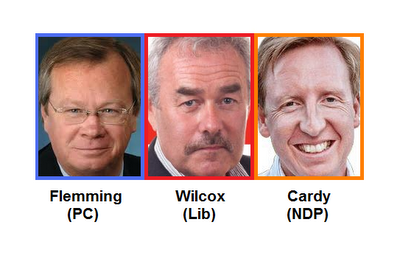 The Tories are running a local lawyer and businessman by the name of Ted Flemming. Flemming comes from a long line of politicians. His grandfather, was former Premier Hugh John Flemming, while his great grandfather, James Kidd Flemming was also the Premier of the province. His main rival will likely not be the Liberal candidate, but the NDP candidate, Dominic Cardy. Cardy is the leader of the provincial NDP, and wants to get into the Legislature as soon as possible, considering his party lacks a single seat there. The Liberals are running retired police officer John Wilcox.

It was a surprise to me that Cardy decided to run in Rothesay. He's not from the region, and it's not the most NDP friendly area (wealthy suburban). However, the Liberals egged him on suggesting he should do it, and he did (now they're calling him a carpetbagger). Now, some have suggested he might just have a shot to win the riding. The NDP, which has little history in the province, has not won the area before, not federally or provincially. The closest the NDP has ever come to winning the riding was back in 1987, when their leader at the time, George Little ran in this seat and won 32% of the vote. While the NDP only won one poll in the area in the 2011 federal election, they can be comforted with the fact that they won a respectable 27% of the vote in Rothesay, and finished 2nd. That means there is some base to work from.

Prediction
While I do think the NDP will have an historic night tomorrow, I do not think Cardy will be able to win the seat. The province is just not NDP-friendly, and Rothesay is the wrong place for the party to start a beachhead in. I think the Tories will still come out on top, with around 45% of the vote. The NDP I think will get no more than 40% of the vote. With the race being between the Tories and NDP, the Liberals will be squeezed to less than 15%.