There are now less than two weeks until the April 23 Alberta election. Not much has changed in the polls since my last projection on March 31. The upstart Wildrose Party remains poised to win a majority government.

Most of the polls released over the last week show the Wildrose Party in the low 40s, the Tories around 30%, and the NDP and Liberals tied in the low teens. This is about where the parties stood for my last projection.

While the Wildrose Party had the momentum during the first week of the campaign, they seem to have hit a plateau, and the election appears to be on cruise control. The WRP has increased their support in rural Alberta, but it appears to have come to the expense of the party in Edmonton, the only part of the province where they are behind the Tories.

Here are my riding by riding projections: 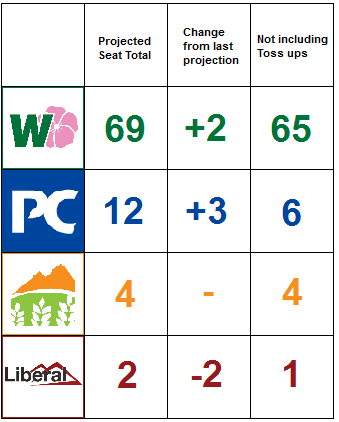 The Wildrose Party increases came from rural Alberta, while the Tories gained from the WRP and the Liberals in Edmonton.

Methodology
For all of you who are not familiar with my projections, I base my predictions on not only poll numbers, but "qualitative" data as well- that is from what I read about local campaigns, and what people tell me. So, if you have any disagreements with any of  my predictions, please let me know, and I can adjust my figures next time.  The point of my predictions is to be as accurate as possible.
Posted by Earl A. Washburn at 12:37 AM