Voters in the riding of Mount Pearl North head to the polls today to elect a new member of the Newfoundland and Labrador House of Assembly. The riding has only been vacant since October 11, when its MHA, Steve Kent resigned to become the Chief Administrative Officer of the City of Mount Pearl. Kent was a member of the Progressive Conservative Party, and had been Deputy Prime Minister of the province under the Premiership of Kathy Dunderdale from 2014 to 2015. He was also mayor of Mount Pearl from 2003 to 2007, prior to being elected to the House. Mount Pearl North will be the first by-election held in the province since the Liberals swept into power in 2015, when they won a landslide majority government, capturing 31 of province's 40 seats. Mount Pearl North was one of only seven seats the Tories had won in the election. 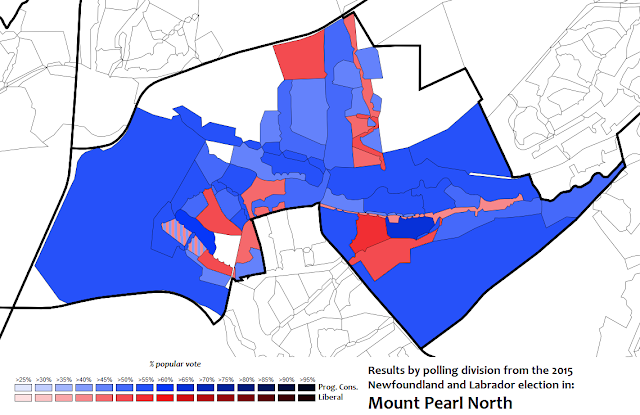 
Mount Pearl North is a suburban riding that covers the northern half of the City of Mount Pearl, the second largest city in the province, and the third largest municipality (after St. John's and the Town of Conception Bay South), located west of St. John's. The riding also covers two small subdivisions in St. John's itself: Brookfield Plains and Edison, which are made up of newly-built homes. The riding is shaped like an upside-down “U”, surrounding the central part of Mount Pearl. It covers the older part of the city in the east (mostly built before 1980), and newer subdivisions in the west and north which were mainly built in the 1980s, and since the 1990s respectively. The riding is more wealthy than the rest of of the province, with the average income being in the mid-$30,000 range (compared to $27,000 for the province) and is overwhelmingly White, with most residents being of English or Irish descent.


The riding is generally a safe Tory seat; it has elected Progressive Conservatives continuously since 1971 except for a by-election in 1988 which elected Liberal Eric Gullage and the subsequent provincial election in 1989 when he was re-elected (though, at the time the riding, then known as “Waterford-Kenmount” also covered what is now the riding of St. John's West). Gullage lost the seat in 1993 to Harvey Hodder, making the riding only one of 16 ridings to elect a Tory MHA that election. Hodder was re-elected in the new riding of Waterford Valley in 1996, a riding with similar borders to today's Mount Pearl North. The riding was one of only nine Tory seats won in 1996, with Hodder winning the seat by a nine-point margin. Hodder continued to represent the seat until Kent's election in 2007, winning increased majorities in 1999 (13 points) and 2003 (53 points!). Kent's first election win was a huge win, thanks to the coattails of the very popular Premier Danny Williams, winning the seat by a whopping 76 point margin over his Liberal opponent. He was re-elected in 2011 by a 54 point margin over the NDP candidate, and faced stiffer competition in 2015 against Mount Pearl mayor (Kent's successor) Randy Simms, whom he beat by nine points.

In the 2015 election, Kent won most of the polls on election day, but Simms won a scattering of polls across the riding. Kent's best neighbourhood was the new Brookfield Plains subdivision, where he won 59% of the election day vote. Simms only won one neighbourhood, that of Masonic Park which covers a nursing home which has since been shut down.


In the federal election, the Tories were a non-factor, as the race was between incumbent NDP Member of Parliament Ryan Cleary and his Liberal opponent, Seamus O'Regan in the greater riding of St. John's South—Mount Pearl. O'Regan defeated Cleary, and easily won the election day polls corresponding to Mount Pearl North 60% to 35%. O'Regan won all but two polls in the area, with his best neighbourhood being Masonic Park (67%) and his worst neighbouhood being the Old part of the city, where he still won 55% of the vote (to Cleary's 41%).

The front-runner in this race has to be the Tory candidate, Jim Lester, a farmer who owns and operates “Lester's Farm”, which is located on the southeastern border of the riding. He was the Tory candidate in the neighbouring Mount Pearl Southlands seat in the 2015 election, which he lost narrowly. The Liberal candidate in the by-election is St. John's businessman Jim Burton, who had previously sought the federal Liberal nomination in St. John's South—Mount Pearl, but withdrew in favour of O'Regan. The NDP candidate is Nicole Kieley, who is the executive director for the Newfoundland and Labrador Sexual Assault Crisis and Prevention Centre. There is a fourth candidate, businessman Hudson Stratton who is running as an independent.

Since winning the 2015 election, the popularity of the governing Liberals took a huge hit in 2016 after the government introduced a number of austerity measures, including the closing of most of the province's libraries. However, Liberal Party support has rebounded, but it is not back to where it was at the time of the last election. Both the Tories and the NDP have benefited from the Liberal's unpopularity, but Tory support is now back to where it was at the election, and the NDP, which currently has no leader is not fairing that much better. Needless to say though, I do not expect the Tories to lose this ordinarily safe-Tory seat.