Today is the day of the 2015 Newfoundland and Labrador provincial election, where voters in that province will be electing members to the 40 seat Newfoundland and Labrador House of Assembly. After governing the province since 2003, the Progressive Conservative Party, led by Premier Paul Davis is expected to go down to defeat to the opposition Liberal Party, led by Dwight Ball. Polls have continuously shown the Liberals with the lead over the Tories since 2013, and their lead in recent polls has been quite substantial. With the outcome all but a certainty, the question will be, which seats will the Liberals not win, if any? The Liberals have been an unstoppable force since the 2011 election, winning every single by-election, and gaining a number of defectors from other parties along the way. The Liberals went from winning just six seats in 2011 to having 16 when the writs were dropped.

Recent polls by Abacus and Corporate Research Associates (CRA) both show the Liberals with more than a 40 point lead over the Tories (64-22 and 67-22, respectively), while Forum Research published a recent poll showing a closer race, with the Liberals at 52% to the Tories' 29%. All three polls showed the NDP in third, in the teens. If Abacus and CRA are correct, it would be the largest Liberal victory in the province since 1956. In that election, the Liberals won 32 of 36 seats in the Assembly and 66% of the vote. This was the highest share of the votes the Liberals have ever won in the province.

Newfoundland and Labrador voters are no strangers to voting en masse for one party, whether its in provincial or in federal elections. Just last month, 64.5% of voters in the province voted for the federal Liberals, leading to that party sweeping the province's seven seats. In the last three provincial elections, the Tories won the support of a healthy majority of voters, including winning 70% of the vote in 2007, the highest vote share any party has won in Canadian history. Despite that historic number, voters in four ridings bucked the trend, electing three Liberals and one New Democrat to oppose the PCs, who won 44 seats.

If winning 70% of the vote wasn't enough for the Tories to win every seat in the 2007 election, will the Liberals be able to do it today? The Tories could not win at least two of those four seats they lost in that election due to socio-economic and demographic factors in those ridings. Two of those seats, Burgeo-La Poile and Cartwright-L'Anse au Clair are both very remote, impoverished ridings facing large declines in their populations. They have the kind of demographics that are the very antithesis of Tory politics, even though the PC leader at the time was the populist Danny Williams, who built his majority on attacking the federal Conservatives. So, are there any ridings in the province that are the antithesis to Liberal politics, which will buck the trend tonight? Maybe, though I would argue the Liberal brand is strong enough in the province that they could win just about anywhere. There are three ridings in particular where I believe the Liberals may not win:

Cape St. Francis
This riding stands out in particular, because the Liberals have never won this riding located just north of St. John's. The St. John's area has long been the least friendly to Liberals, so if there is anywhere they will not win, it will be in historically Tory seats like this one. The Liberals did almost win the riding in 1996, in an election where they won 55% of the province-wide popular vote. PC MHA Jack Byrne held it by just 141 votes in that election. There was no NDP candidate however, and the NDP has proven to be competitive in this riding in subsequent elections. The NDP did quite well here in the 2011 election, winning 38% of the vote (while the Liberals won just 3%). How strongly the NDP does in Cape St. Francis will determine whether or not the Tories will be able to hold it. Their candidate in 2011, Geoff Gallant is now running for the Liberals, but they still have a strong candidate in defence attorney Mark Gruchy. If Gruchy can take enough votes away from Gallant, the Tories should manage to hold this seat. Tory fortunes are pinned on Kevin Parsons, who has held the seat since 2008, was the mayor of Flatrock before that, and is the son Kevin Parsons, Sr. who held the seat from 1986 to 1993.

Ferryland
This riding, located just south of St. John's is also a Tory stronghold, having voted for the Progressive Conservatives in every election since 1971. And unlike Cape St. Francis, the Liberals have not come close here in recent memory. In 2007, Tory Keith Hutchings won 84% of the vote in this riding, and was re-elected in 2011 with 72% of the vote. The NDP candidate won 24% of the vote here in 2011, while the Liberal candidate won just 4%. Hutchings, who is the province's Minister of Municipal and Intergovernmental Affairs is running for re-election. The Liberals are still aiming to pick this seat up though; their candidate, Jeff Marshall has been “campaigning for months” according to the CBC.

St. John's East-Quidi Vidi
This is the riding that former NDP leader Lorraine Michael has chosen to run in. It contains parts of two ridings that went NDP in 2011, St. John's East and Signal Hill-Quidi Vidi. Michael has held Signal Hill-Quidi Vidi since 2006, and the NDP have held on to this area since 1990, avoiding landslide elections that elected both Liberals and Tories. If there's one seat the NDP should keep in this election, it will be this one. Michael led the NDP to an historic five-seat victory in 2011, but her leadership of the party was divisive, and two of her MHAs defected to the Liberals. She resigned as leader, but will be running again in this seat. She may not be popular among many members of her party, but she remains popular in her riding.

Others?
Those are the ridings I believe will not go Liberal in today's election. However, there are other ridings either the PCs and NDP could win. Two historical Tory seats that could buck the trend are Baie Verte-Green Bay (Tory held since 1993) and Bonavista (also Tory held since 1993). Their chances are increased by the fact that they have incumbents running for re-election in both seats. Conception Bay East-Bell Island is another Tory-victory possibility. While the Liberals last won the riding in 1999, they only won 4% of the vote there in 2011. The NDP candidate, Bill Kavanagh won 41% of the vote in that election, and is trying again this time. The Liberals do have a strong candidate in former Labrador MHA Danny Dumaresque. The incumbent MHA, David Brazil, who is also the Minister of Transportation and Works is running for re-election, and could come up the middle to win the seat. There of course could be other seats the Tories could win, based on the personal popularity of their incumbents, but it's anyone's guess where those will be.

For the NDP, their next best hope after St. John's East-Quidi Vidi is St. John's Centre, where NDP MHA Gerry Rogers is running for re-election. Other than Lorraine Michael, Rogers is the only other MHA running for re-election for the New Democrats. When Rogers won the seat in 2011, it was the first time ever that the party won the riding. She won the seat with 54% of the vote, defeating the Tory incumbent by over 500 votes. The Liberals only won 2% of the vote. However in this election, her main competition will come from the Liberal candidate, accountant Lynn Sullivan.

Other than the Tories and the NDP, the best chance for an independent (there are no other parties running) to win is former MP Rex Barnes, who is running in Grand Falls-Windsor-Buchans. He was a Progressive Conservative MP for Gander—Grand Falls from 2002 to 2004, and served as mayor of Grand Falls-Windsor from 2005 to 2009.

Abacus conducted four riding level polls during the campaign for VOCM, including polling the ridings of Premier Paul Davis, who is running in Topsail-Paradise and NDP leader Earle McCurdy, who is running in St. John's West. Abacus' poll showed Davis losing in his riding to Liberal candidate (and Conception Bay South MHA) Rex Hillier 56-35. Abacus also showed the Liberals ahead in St. John's West, with their candidate, former MP Siobhan Coady leading McCurdy 57%-24%. If these polls prove to be correct, then both the Tories and NDP could be looking for new leaders fairly soon. 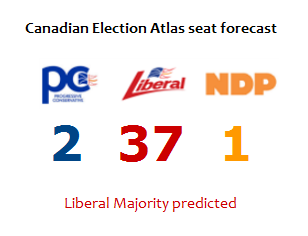 Given all of this information, my (mostly) qualitative seat forecast is that the Liberals will win 37 of the 40 ridings in the province (the legislature will be reduced to 40 seats from 48 following a redistribution this year). The Tories will win two seats, and the NDP should win just one. Due to time constraints, I have not done a formal quantitative seat model for this election, but I do not expect to get many seats wrong, unless the polls are well off. In landslide elections, seat predictions become much easier, as the question only comes down to guessing which seats the winning party will not win.

In this seat-by-seat forecast, the riding names have been coloured based on how they voted in 2011:

We shall see the extent of the damage (both electorally, and to my forecast) after the polls close at 8:00pm local time (6:30 Eastern). It likely won't be a very long night.

Email ThisBlogThis!Share to TwitterShare to FacebookShare to Pinterest
Labels: 2015, forecast, Newfoundland and Labrador