There are now only six days left until the Alberta election, and so it is time for another projection. Since my last projection, polls have continued to show the NDP and the Wildrose Party in a neck and neck race across the province, with the governing Progressive Conservatives in a not-too-distant third place. The NDP has continued to poll well, thanks to a strong debate performance by their leader, Rachel Notley and despite the typical red-baiting one normally sees when ever the NDP does well somewhere. The New Democrats have even held firm in the polls after coming out against the Keystone XL pipeline, something that is supported by a majority of Albertans. For Wildrose, despite the poor debate performance by their leader Brian Jean, they continue to benefit from the unpopularity of the governing Tories, as centre-right voters are still parking their votes with them. 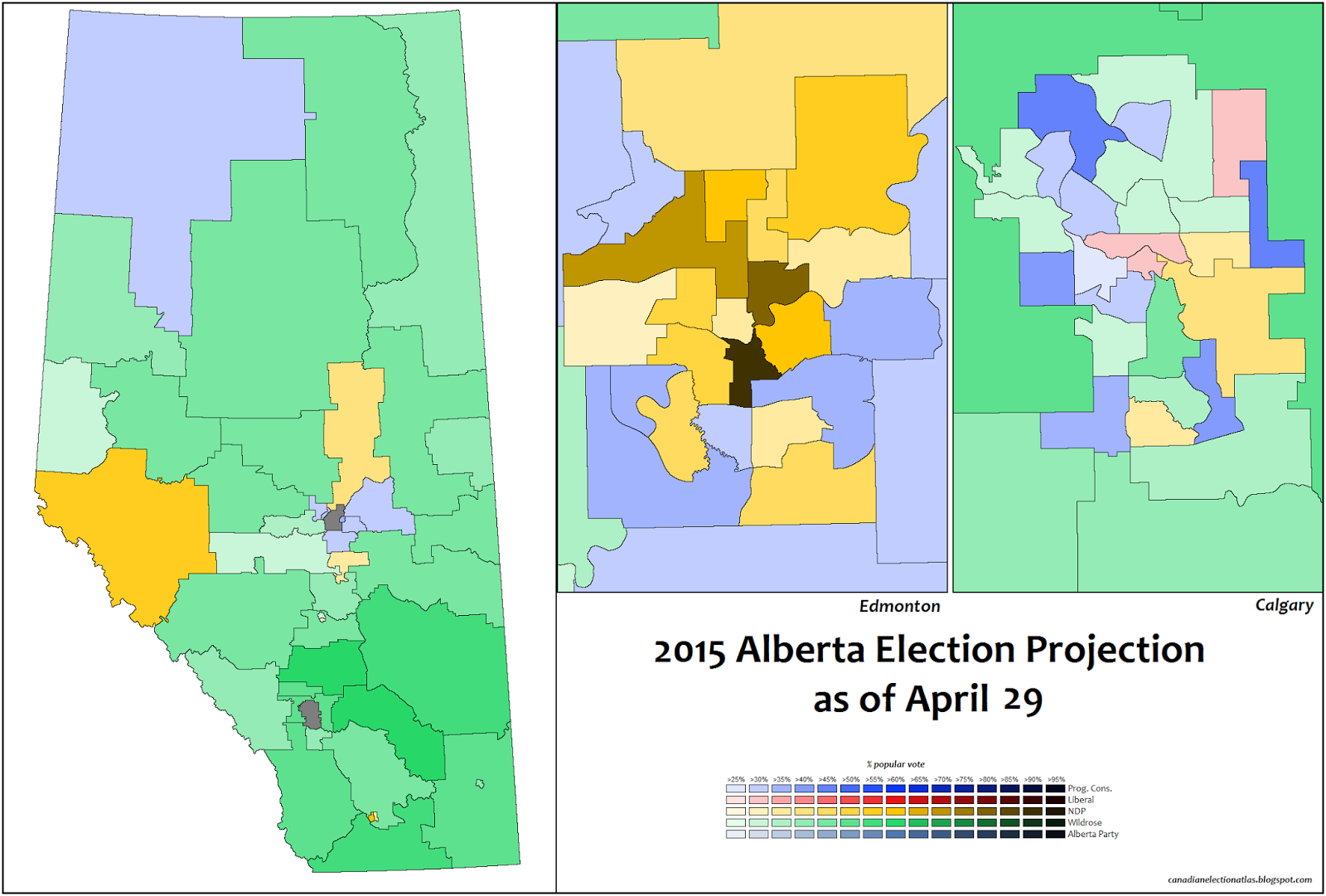 For today's projection, I have used the most recent Forum and Mainstreet polls which were both released on April 23rd. The Forum Research poll showed the NDP with a large lead (38% to 25%) over the Wildrose Party, while Mainstreet showed Wildrose ahead by one point (32% to 31%). The Tories were in third place in both polls; Forum had them at 20% while Mainstreet had them at a more respectable 26%. The Liberals and Alberta Party were in single digits in both polls. I have given more weight to the Mainstreet poll, as it had a much larger sample size. I have ignored recent polls conducted by Pantheon Research and 1ABVote, due to suspect methodologies (in the case of 1ABVote) or unknown regional subsample totals (Pantheon).

In Calgary, polls have shown a three way race between Wildrose, the NDP and the Tories, and this shows up in the riding polls as well. The poll conducted in Calgary-Fort confirms the strong candidacy of former city councillor Joe Ceci for the NDP. Outside of that riding it is difficult to tell where exactly the NDP might win, as the riding polls are contradictory. The NDP had a good result in Calgary-Klein in 2012, but a poll there showed Wildrose ahead. Meanwhile in Calgary-Shaw, the NDP is ahead, despite the Wildrose Party winning it in 2012. This may be due to anger over the riding's incumbent, Jeff Wilson crossing the floor to the PCs. One other interesting riding that was polled is Calgary-Elbow, where the Alberta Party is running their leader, Greg Clark. Two polls conducted in that riding confirm what I expected in my projection: that Clark has a chance at winning it.

In Edmonton, riding polls have confirmed that the NDP is going to sweep nearly every seat in the city. The NDP is even leading in Edmonton-Whitemud, which was the best seat in the entire province for the PCs in 2012. However, an earlier poll conducted in Edmonton-Beverly-Clareview showed NDP incumbent Deron Bilous with only a 25-point lead in his riding, against city councillor Tony Caterina of the Progressive Conservatives. My model had been showing a larger lead for Bilous, and following me entering massive NDP leads in other ridings in the city, my model has forced this 25 point lead to narrow. I'd take that with a grain of salt at this point.

Outside the two major cities, there have been few riding polls conducted. A poll from Fort McMurray-Conklin confirmed Wildrose leader Brian Jean had the lead there, although by a much closer margin than expected. However, Fort McMurray, due to its transient population and low voter turnout is notoriously difficult to poll. A poll was also conducted in Highwood, which was the riding of former Wildrose leader Danielle Smith. Despite Smith switching to the Tories, and losing their party's nomination, voters there continue to support Wildrose. The Wildrose Party continues to lead in rural Alberta, and without more riding polls outside Edmonton and Calgary, one can only speculate which seats the Tories will hang on to or the NDP might win.


Liberals, others not running full slates


One other factor I had to consider in my projection model was that the Liberals, and the more minor parties are not running full slates. The Liberals, which ran a full slate in 2012, are only running in 56 of the 87 ridings in the province, while the Alberta Party is running 36 (down from 38 in 2012) and the Greens are running 24 (down from 25). Most of the ridings without Liberal candidates can be found in rural Alberta. Entering Liberal poll numbers into rural Alberta had condensed their vote into only the handful of seats they were running in. The result of this was that my projection showed the Liberals ahead in Red Deer-North and a close second in Lethbridge-East. Both of these outcomes are unlikely, so I reduced the Liberal numbers in rural Alberta based on their proportion of the 2012 vote that they won in the ridings they have candidates versus the ridings they do not. I did the same for “Other”, as my model was also showing inflated vote totals in some ridings.

Since my last projection, the Tories are up a net of five seats, the Wildrose Party is down four, the NDP and Liberals have no net change in seats, while the Alberta Party is down one. The Tories have made most of these gains in Calgary, at the expense of Wildrose (in Calgary-Hawkwood, Calgary-Lougheed Calgary-Northern Hills and Calgary-West). Due to a riding poll, they're now ahead in Calgary-Elbow (from the Alberta Party in last projection). My model also now shows them ahead in Edmonton-Mill Creek (from NDP). Also due to riding polls, the Tories are now behind in Edmonton-Whitemud (to NDP) and Stony Plain (to Wildrose). Riding polls were also the reason that the NDP is now up in Calgary-Fort and Calgary-Shaw (both from Wildrose) but are no longer ahead in Calgary-Klein (from Wildrose). 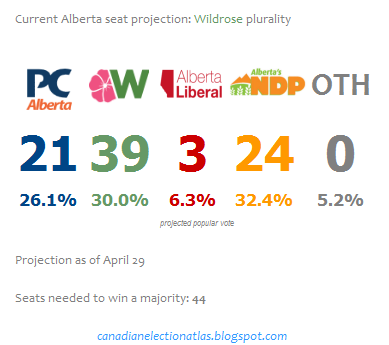 Despite a lead in the polls, the NDP vote distribution is heavily concentrated in Edmonton, which means they do not have a very efficient vote. 15 of the 24 ridings my model shows going NDP are in Edmonton. This is benefiting the Wildrose Party, whose lead in rural Alberta and strong support in Calgary has meant that they continue to have the advantage in the most seats. However, my numbers show that they are now five seats short of a majority.

Calgary remains the main battleground of the province. The Wildrose Party, the Tories and the NDP are in an effective three-way tie there, which means nearly every seat in the city is a toss-up that could go to any of those three parties (or the Liberals or Alberta Party in some seats). While the NDP is sweeping Edmonton and the Wildrose Party is sweeping rural Alberta, whoever can win the most seats Calgary will win the election. 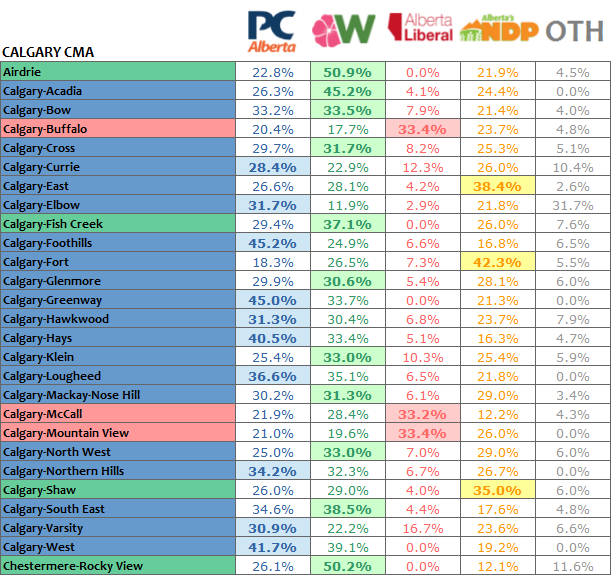 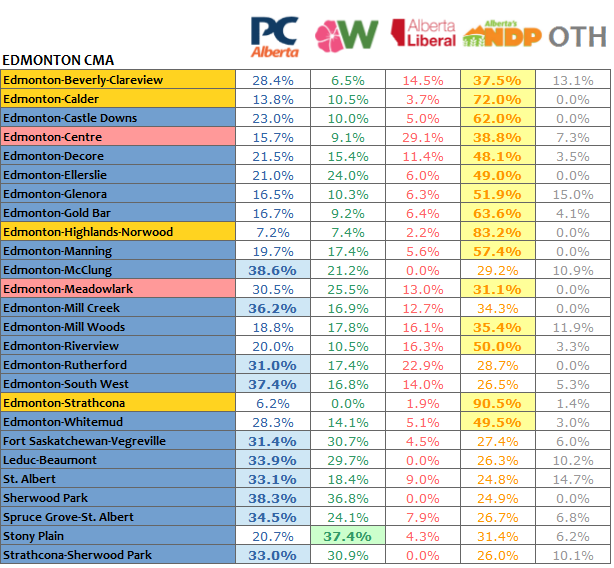 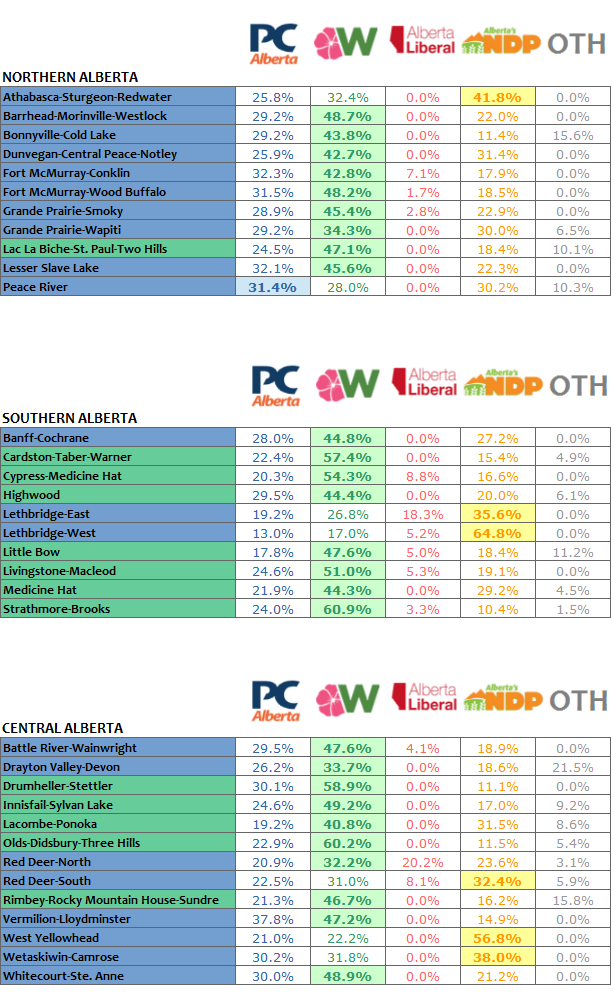