Across the St. Lawrence River from Quebec City lies the city of Levis, Quebec. Levis is home to the riding of Levis, whose voters are heading to the polls today to elect a new member of the National Assembly of Quebec in a provincial by-election. Voters in the riding last went to the polls just six months ago in the last provincial election held on April 7, when they voted in Christian Dube of the C.A.Q. Dube resigned his seat in August to work for the Casse de depot et placement, a fund that manages Quebec's public pension plans.

The riding of Levis hugs the St. Lawrence River in a narrow strip running from the city's eastern limits in the east to the Chaudiere River in the west, and from the St. Lawrence in the north to Autoroute 20 in the south. The riding contains the old core of Levis, the former city of Lauzon, and the former municipalities of Saint-David-de-l'Aberiviere and Saint-Romuald. Lauzon and Saint-David were amalgamated with old Levis in 1989, while Saint-Romuald was amalgamated in 2002. Saint-Romuald is found in the borough of Les Chutes-de-la-Chaudiere-Est while the rest of the riding is in the Borough of Desjardins.

Despite being considered a suburb of Quebec City, a majority of homes in the riding were built before 1980. The riding is overwhelmingly Francophone, with 98.0% of inhabitants having French as their mother tongue, compared to just 0.9% for English. The riding is also overwhelmingly White at 97.7%. There are few immigrants in the riding, with just 4.5% of the riding being either first or second generation. In terms of ethnicity, almost all of the population identifies as Canadian (96.2%), with a majority also identifying as French (50.7%). There is also a small Irish population (5.9%). 87.1% of the riding is Catholic, while most of the remainder of the population is non religious at 10.3%. The riding is slightly wealthier than the provincial average. The median income is $31,000 while the average is $37,000. The largest industry in the riding is health and social assistance at 15%. Retail is next at 13.3% and there is also some manufacturing 11.1% of the labour force.

Levis is found in the “small-c” conservative heartland of Quebec known as the Chaudiere-Appalaches region. The riding is found in the federal constituency of Levis—Bellechasse which is held by Conservative cabinet minister Steven Blaney. Blaney has held the seat since 2006. The riding also went Tory during the Mulroney years in the 1980s, and it even voted Social Credit in 1962. Provincially, the riding has been held by the centre-right C.A.Q. since 2012, and has also been represented often by centre-right parties in the National Assembly, like the A.D.Q. (2007-2008), Ralliement creditiste du Quebec (1970-1973) and was held off-and-on by the Union Nationale before that. 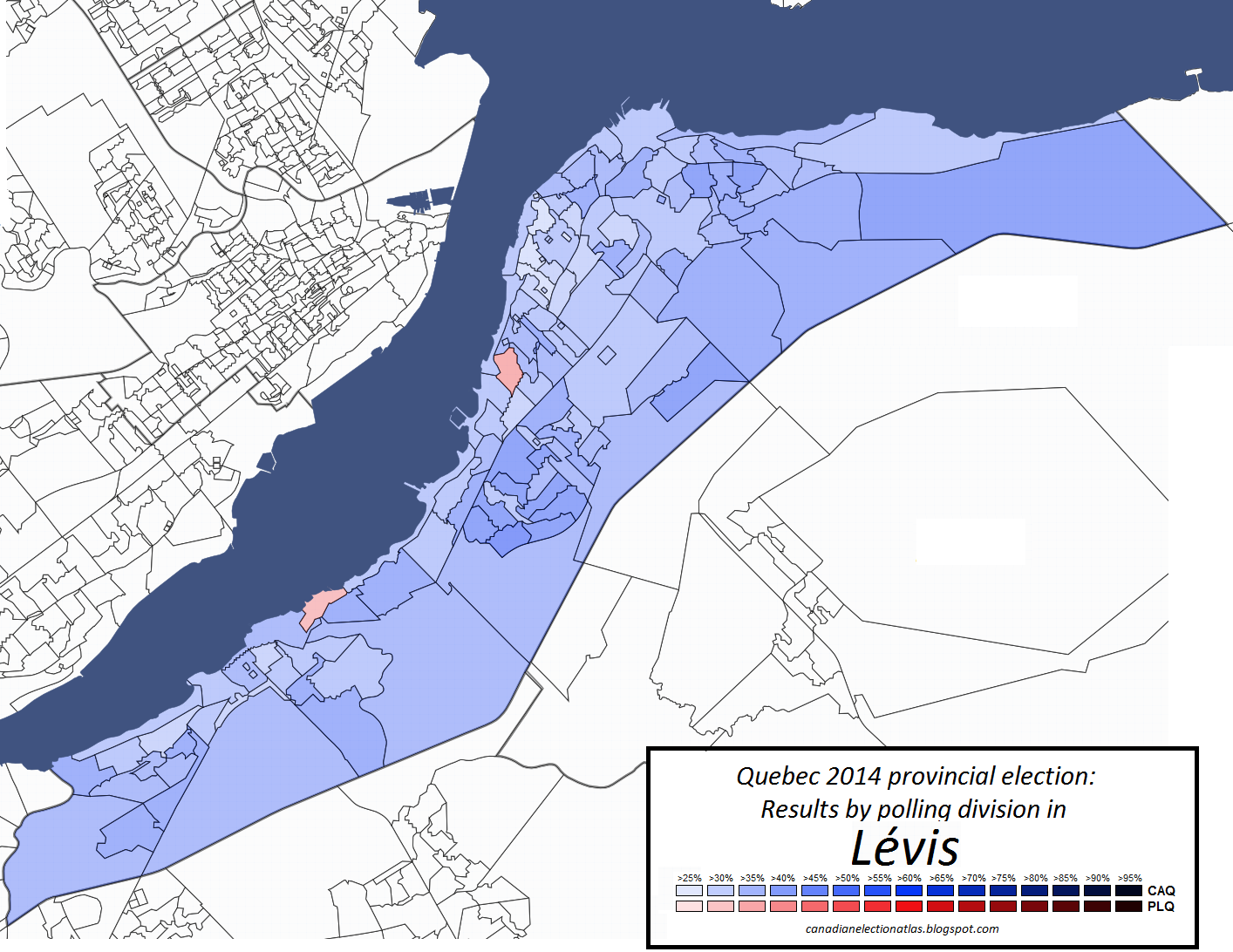 Levis is not quite as conservative as the rest of the Chaudiere-Appalaches region. While the federal riding of Levis—Bellechase went Conservative in 2011, the Levis part of the riding went NDP. Historically, Levis has also been more supportive of the Bloc than the surrounding region. Provincially, Levis went for the centre-right C.A.Q. party, while Bellechasse went for the Liberals. However, other parts of Chaudiere-Appalaches gave the C.A.Q. stronger percentages in the April provincial election.

The riding itself is quite politically homogenous. In April, only two polling divisions in the entire riding went Liberal, while the remaining polling divisions all went for the C.A.Q. This is despite the fact that the Dube only won with 40.5% of the vote to the Liberals' 34.9% (it should be noted that the Liberals won the advance vote by a considerable margin in the riding, which mostly contributed to this).

Recent province-wide polling has shown that the C.A.Q. has moved firmly into 2nd place, behind the governing Liberals in the province, with the P.Q. in a distant third. The C.A.Q. is up at least five points from the election held in April, which has come mostly at the expense of the P.Q., but it has cost the Liberals at least three points in the polls, if not more. Therefore, it stands to reason that today's by-election will easily result in a C.A.Q. victory, considering they had won the seat in April. The C.A.Q. is running TV host Francois Paradis, who has worked for TVA. The Liberals are running municipal civil servant Janet Jones, who is counting on the popularity of the governing Liberals to be high enough for a surprise win here. The PQ candidate is Alexandre Begin, a political aide, who will try to prevent the PQ from seeing its worst showing in the riding since its first election in 1970, where they won 13.6%. The socialist Quebec solidaire party is running Yv Bonnier Viger who is a professor at Laval University and ran for the party in April. He will be looking at increasing the 6% of the vote he won, which was the best ever showing for the fledgling party. Also running of note is the leader of the Green Party, Alex Tyrrell and Conservative Party leader Adrien Pouliot as well as five other candidates.