The Canadian Election Atlas is back from hiatus to take a look at the federal Liberal Party leadership race which will decide a winner today. Admittedly, it has not been a race I have been interested in too much, as since the beginning, the winner has been a foregone conclusion. (If you've been living in a box, that winner is Justin Trudeau). Despite this foregone conclusion, the race has six candidates, and at one point had as many as nine candidates. The last time a Liberal leadership race was a foregone conclusion (not including 2009), there were only two candidates (when Paul Martin beat Sheila Copps in 2003).

Despite the race being a foregone conclusion, the abundance of candidates has meant that there is a race, and the Liberal Party's decision to ditch the traditional delegated conventions and move to a more democratic one member one vote system has made the race at least a little interesting. And it's not just a one member, one vote system either, as the Liberals have expanded the amount of people who can vote in their leadership election by allowing people who “support” the party to vote in it, without needing to get a membership. In total, 127000 people are eligible to vote the Liberal leadership race.

The press has had a field day comparing the Liberal leadership race to the NDP's leadership race. Indeed, the amount of registered voters is similar (the NDP had about 131000 eligible voters). However, the Liberals have surpassed the NDP in terms of actual voters. I won't go into partisan reasons why, but I just thought it was interesting.

Anyways, much like the NDP race, I have made an endorsement map for the Liberal leadership race. It's not nearly as interesting as the NDP race, as there were fewer endorsements made, and most endorsements were for Justin Trudeau. In terms of political endorsements (only counting people who have been democratically elected), Trudeau leads in Manitoba, Ontario, Quebec, Nova Scotia, Prince Edward Island and Newfoundland and Labrador. 2nd place candidate Joyce Murray (MP for Vancouver Quadra) leads the endorsement race in her home province of BC, while former MP Martha Hall Findlay (Willowdale) leads in Alberta and New Brunswick. Saskatchewan, which had just two endorsers is a tie between Trudeau and Murray, with one endorsement each. Deborah Coyne is the only other candidate with a political endorsement. Candidates Martin Cauchon and Karen McCrimmon have none.

Hopefully the Liberal Party will release provincial results for their leadership race, but might hold out on doing so, like the NDP. If they do, it will be interesting to compare the actual results to the endorsements. In any event, if the endorsement map tells us anything, it is that this race is Trudeau's to lose. If there is a race for second, it will be between Joyce Murray and Martha Hall Findlay, although I personally think Murray has the edge.

The first map shows the provinces and territories coloured in my number of registered Liberal voters. Ontario has by far the most amount of voters at 59,474 which accounts for 47% of the Liberal electorate. Interestingly, British Columbia is next with 16,098 followed by Quebec at 14,577. Not surprisingly, Nunavut has the least amount of Liberal leadership voters at 56. 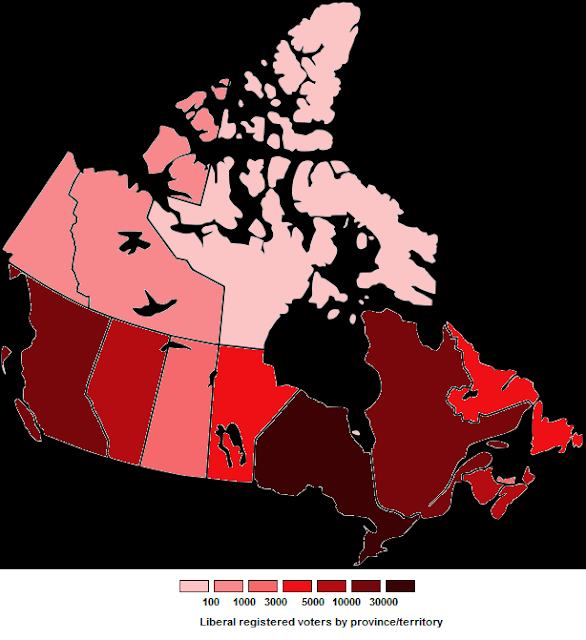 The second map is coloured by the percentage of the population who are eligible to vote for Liberal leader. Prince Edward Island tops this list, as the only province or territory where more than 1% of the population is registered to vote (1.86%). The next highest is New Brunswick at 0.92% followed by Nova Scotia at 0.81%. Quebec and Nunavut are the lowest at just 0.18%. 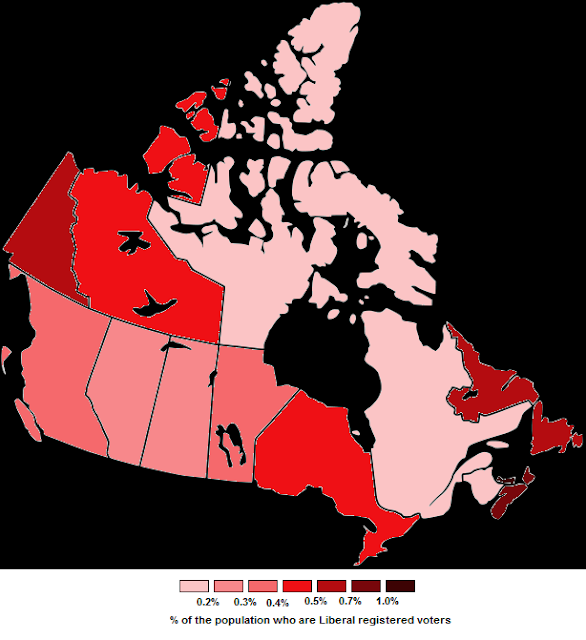 The next maps shows the registered Liberal vote to MP ratio. BC tops this list, having just 2 Members of Parliament for it 16000 voters. New Brunswick is next, with just one MP for its 6900 voters. The province with the best ratio is Newfoundland and Labrador which has 4 Members for 3149 registered voters. Alberta, and the three Territories have no Liberal MPs. 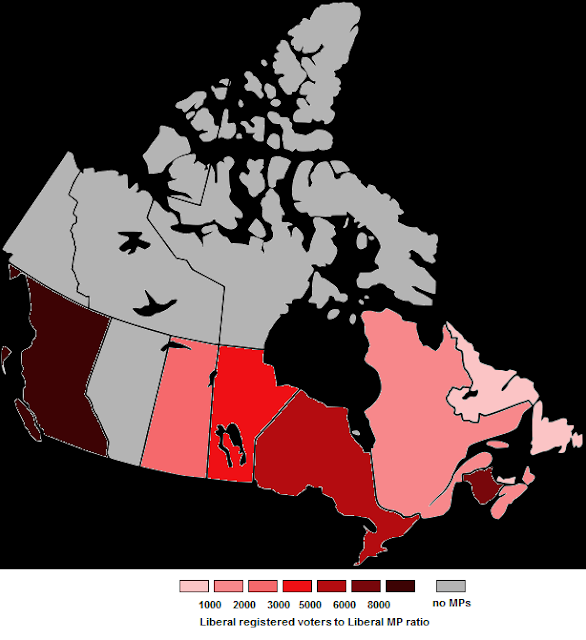 The final map shows the ratio of actual Liberal voters (that is people who voted Liberal in the last federal election) to registered Liberal voters. One thing I found from this calculation is how relatively even these numbers are across the provinces and territories. The range goes from 40 in Nunavut to 12 in PEI. This is far more even than we saw in the NDP race, where we saw some large discrepancies, such as in Quebec. 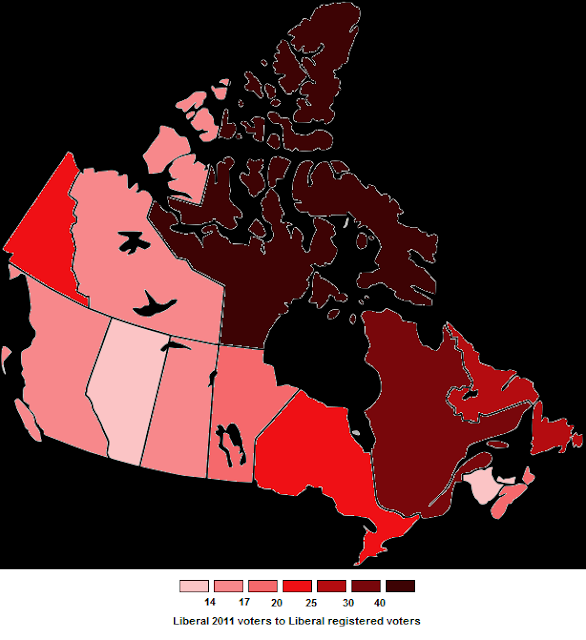