Yesterday, Prime Minister Harper finally announced the date of the Toronto--Danforth by-election, needed to fill the seat that was vacated by the death of former NDP leader Jack Layton back in August. The date chosen was March 19.

Here at the Canadian Election Atlas, I hope to take an in depth geographical analysis of the riding over the next few weeks. Last month, if you will recall, I took a look at the boundary changes of the riding since confederation.

For this post, I will look at the riding's demographics. I have made maps showing income levels, race, language and religion. All topics of interest to me. However, if you would like to see some more demographic maps, please let me know by leaving a comment or emailing me with a request, and I will be happy to make a supplementary blog post.

First, let's get acquainted with the riding's neighbourhoods. 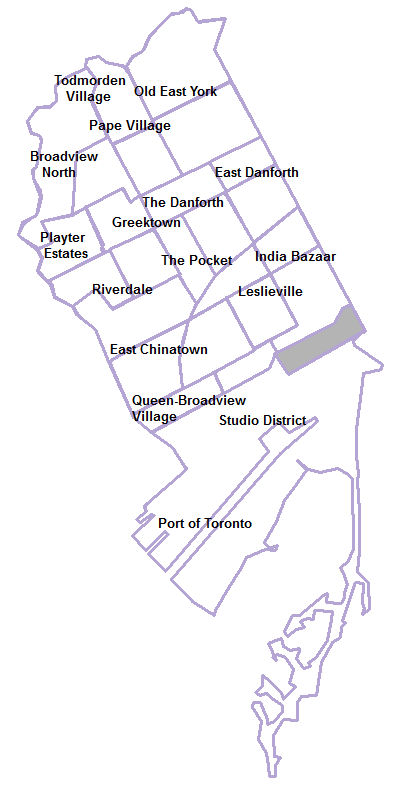 These are some of the general neighbourhood's in the riding. They don't have any official borders, so ignore the purple lines- I'll get to them in a second. These neighbourhoods are their approximate locations, which I researched on Wikipedia, and backed up using Atlases and other online sources.

The purple lines are the census tract boundaries in the riding. Statistics Canada provides detailed demographic data up to that level. The City of Toronto also provides data at that level, which is another source I used to get language information (which Statistics Canada doesn't provide unless we're talking about English or French). The grey census tract is actually an uninhabited portion of a larger census tract found in neighbouring Beaches--East York. Ignore it, no one lives there.

Unless otherwise noted, these maps are from the 2006 Census. Demographic information from the 2011 Census wont be available for a few months.

One thing I have discovered from making these maps, is the contrast between the north part of the riding and the south. The north has a large Greek, and Orthodox population (it is home to Greek Town after all), while the south has a large Chinese population, and is home to East Chinatown.

For income data, I have made just one map. This map shows the average annual income of a person over 15 (before taxes) in the riding from 2005. The riding is generally homogenous when it comes to income. Most census tracts have an average income of between $20,000 and $30,000. However, there is a somewhat wealthy pocket of the riding in the west Danforth area (including parts of Greektown and an area called "Danforth by the Valley"). These three census tracts, in the darkest green on the map all make about an average of $38,000. The poorest part of the riding is in Leslieville and the neighbouring India Bazaar area. Both India Bazaar and the census tract around Greenwood Park were the poorest census tracts in the riding, both earning an average of $18,000 in 2005.


Language
After English of course, the two main languages of the riding are Chinese and Greek. As mentioned earlier, Chinese is mostly spoken in the south of the riding, while Greek is predominant in the north.

Two census tracts in Leslieville, and the census tract containing East Chinatown have the highest percentage of people who reported either Mandarin or Cantonese as their mother tongue. For the record, around 3 quarters of these native Chinese speakers are Cantonese. There are probably more Chinese speakers not shown on this map, but the Toronto Social Atlas which I used didn't include other Chinese languages or people who just wrote "Chinese" as their mother tongue.

Race
After Whites, the four main racial groups in the riding are Chinese, South Asians, Blacks and Filipinos. I have mapped all four.

South Asians can be found more in the central/eastern part of the riding. The highest concentration can be found in the Danforth area, the Pocket, and of course the India Bazaar.

The Black population in the riding is fairly spread out, but there is a higher concentration of Blacks along Pape Avenue, south of Danforth.

Meanwhile, Filipinos are also spreadout, and only number more than 6% in two census tracts, one in East York, and the largest is the low populated Studio District.

Religion
I made quite a few maps showing the strength of various religions and denominations of the riding. Note, that these maps are a bit out dated, since they are from the 2001 census. Religion is only asked on every second census, and was not asked in the 2006 census.

The Toronto Social Atlas was nice enough to breakdown the various Protestant denominations in the city, so I was able to combine all of the mainline Protestants into one group for the next map. Mainline Protestants seem to be concentrated in the more wealthier parts of the riding, in the central west and northeast.

Toronto--Danforth has the highest percentage of Orthodox Christians out of any riding in Ontario, at 11%. The riding has a high population of Greeks and Serbs, and they tend to be Orthodox. Almost all of the Orthodox in the riding live in the north, especially in the northwest of the riding. In fact, two census tracts have a majority of its population being Orthodox. Both of these census tracts are in the Broadview North area of the riding, west of Pape.

5% of the riding is Muslim, and they are mostly concentrated in the Pocket, and in the India Bazaar.

My final map shows the Jewish population. Only 2% of the riding is Jewish, and the are found more in the wealthy west part of the riding, in Riverdale.