Newfoundland and Labrador goes to the polls today, and we can expect nothing short of another Tory landslide. The party, which has been in power since 2003, is expected to win a third straight majority mandate. That would normally mean a boring election, however the race is still on for which party will be the official opposition.


With the NDP seen by many Newfoundlanders as the new opposition party, it will be interesting to see how they do. Much of the St. John's area is a strong Tory area, where most incumbents are running for re-election, therefore the NDP will have a hard time winning seats on 25-33% of the province-wide vote. The pundits are suggesting the best shots for the NDP in the area are St. John's North and St. John's Centre, and apparently the Tories and NDP are running neck and neck in the city. Given all the information I could gather, I've compiled my projections.


Predicting the toss ups
Burin-Placentia West
This is certainly an odd seat to suggest the NDP has a chance in, but it's true. The riding isn't in the St. John's area, and the federal party did very poor in this area. The Tory MHA for this riding is the Fisheries Minister, and he is coming under some heat. The NDP candidate, Julie Mitchell ran in this riding in 2007 and did very well. I expect her to gain this seat.
Humber Valley
This is a rematch of the 2007 election between former Liberal MHA Dwight Ball and current Tory MHA Darryl Kelly. That race was quite close, with Kelly winning by about 250 votes. Poll don't suggest much change in this part of the province, so I predict that Kelly will keep this seat.
St. George's-Stephensville East
This is the riding where Liberal leader Kevin Aylward is attempting to gain a seat in the house. He will have a hard time however, as the Tory incumbent, Joan Burke received 75% of the vote here in 2007. Aylward did hold the seat from 1985 to 2003. His final election in 1999 was decided by just 600 votes, despite a Liberal majority government. Burke won the election to replace Aylward by just 500 votes. I expect another close race here, but I think Burke will hold on, embarrassing the Liberals.
The Isles of Notre Dame
Former Liberal leader Gerry Reid lost by just 7 votes in this riding in 2007. He won't be running again this time, but the Liberals are still challenging here with their candidate in Danny Dumaresque. Dumaresque is a former president of the Liberals, and a former MHA representing a Labrador riding. He also ran for the leadership of the party. Given all that, I still feel the Tories will keep this seat.
St. John's East
With the NDP surge happening in St. John's they are sure to be on the rise here. This was the party's best St. John's riding in 2007. They are running consumer advocate George Murphy. If the NDP has a good night, they will win this seat, but for now I think the Tories will keep it.
St. John's Centre
The pundits think that the NDP has a shot here, and so with the NDP on the rise in the city, I'll have to call this for them. They are running filmmaker Gerry Rogers in the riding. She is up against cabinet minister Shawn Skinner. Openly Lesbian, let's hope that homophobia isn't a factor here for Rogers. For the record, the NDP lost this seat by 2700 votes in 2007.
St. John's North
The other seat the pundits say the NDP has a chance in is here. The party is running Dale Kirby, “an award winning” professor at Memorial University. Bob Ridgley is the Tory MHA. The NDP finished third here in 2007, losing by 3000 votes. However, given the rise in the numbers for the party, I will project an NDP win here. 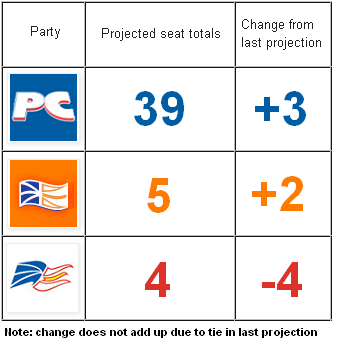 Conclusion
It appears as though it will be much the same in 2011 as it was in 2007, with the Tories winning a landslide election. PC leader Kathy Dunderdale is no Danny Williams, but voters will opt to stay the course in a province that has never been as prosperous. However, the big news will be that the NDP should eke out official opposition status, as long as they can make actual seat gains in St. John's.

Email ThisBlogThis!Share to TwitterShare to FacebookShare to Pinterest
Labels: Newfoundland and Labrador, Predictions