While time constraints prevent me from making maps of every riding before the provincial election, I will publish three for the time being. One I made myself (Etobicoke-Lakeshore) and the other two (Ottawa Centre & South) were made by MaxQue from the U.S. Election Atlas forum who has given me permission to use any maps he makes for this  blog. 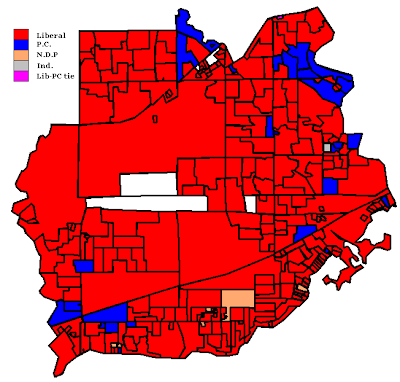 It should be noted that that one independent poll is probably a voting irregularity, as sometimes pops up now and then. There really is no way that the independent candidate (who finished last in the riding with 456 votes or 1%) could have won a poll. Also consider the fact that the Liberals who won the riding received 0 votes there. I've seen this in the past where a Marxist-Leninist candidate in a Mississauga riding won a poll in 2004. It was the first poll that came out on Election night, and it sure was funny seeing Peter Mansbridge declare that the Marxist-Leninists were leading in one riding!
But anyways, the other two riding maps I will show are of my home riding (Ottawa Centre) and the one I grew up in (Ottawa South). MaxQue has put both ridings in the same map: 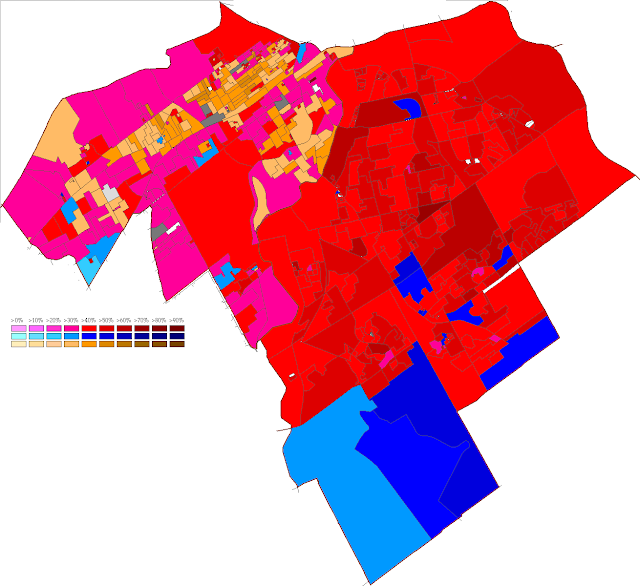 It should be obvious where the boundary is: it separates the pink and orange areas on the left (Ottawa Centre) from the darker red areas on the right (Ottawa South). Red represents the Liberals of course, blue is for the Progressive Conservatives and orange is for the NDP.
Posted by Earl A. Washburn at 12:15 PM